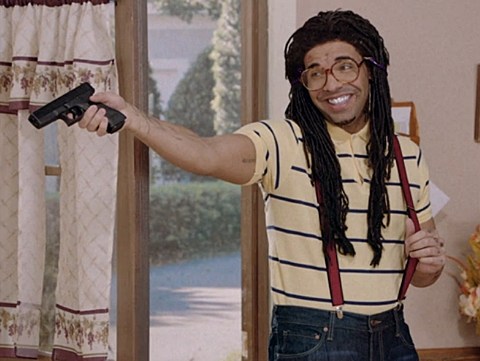 The first Saturday Night Live episode of 2014 aired last night (1/18) with Drake as the host and musical guest. He acted in most of the sketches, including "Hip Hop Classics Before They Were Stars" where he impersonated Lil Wayne as Steve Urkel on "Family Matters" and Jay Z on "Mr. Wizard." That same sketch also had Kenan Thompson playing Rick Ross as the red Teletubby. Drake also did a sketch re-enacting his Bar Mitzvah and "Resolution Revolution" where he rapped about (and then broke) new year's resolutions to stop drinking and smoking, and then did Cosplay dressed as a wizard for the "no more Cosplay" resolution. He was in a few other sketches too, including impersonations of A-Rod and Katt Williams, all of which can be watched in the full episode video below.

For Drake's musical performance, he did "Started From the Bottom" into "Trophies" and a stripped down version of "Hold On We're Going Home" into "From Time," the latter of which featured an appearance by Jhene Aiko who also sings on the album version of the song and sang with him at his recent Barclays Center show. Videos of those performances are below too.

Drake - "Started From the Bottom" / "Trophies"

"Hip Hop Classics Before They Were Stars"