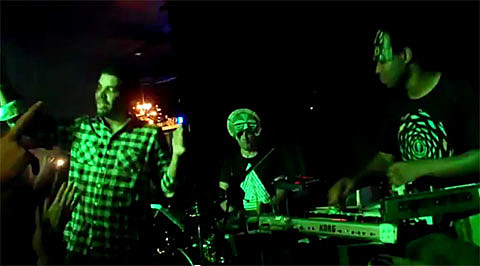 As you might know, Drake remixed/rapped over the SBTRKT track "Wildfire" which otherwise features Little Dragon's Yukimi Nagano on vocals. Last night (7/8), SBTRKT played a show at Wrongbar in Toronto. As we mentioned, a super special guest was expected in addition to SBTRKT vocalist Sampha. Guess who that was? Videos below.

SBTKRT plays PS1 Warm Up in NYC TODAY (7/8) and then DJs or plays at Coco66 afterwards. (SBTRKT DJ'd at Glasslands on Wednesday night).

SBTRKT & Sampha with Drake in Toronto

Drake guesting with SBTRKT in Toronto