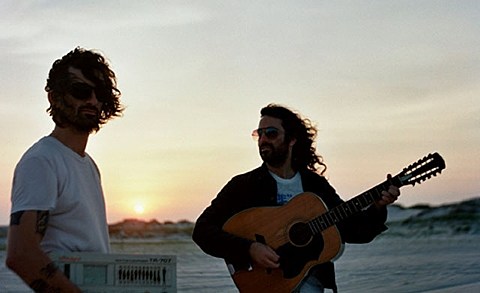 We already posted two upcoming NYC shows for Brooklyn's Dream Police, another project of Mark Perro and Nick Chiericozzi of The Men, and now a third's been announced. So has a tour (that doesn't hit NYC) with another intriguing Brooklyn band, Honey (mems Psychic Ills, Amen Dunes, Stupid Party). In addition to Dream Police's sold-out David Lynch Foundation benefit at Saint Vitus on 9/25 with Earth and Cult of Youth, and the Sacred Bones CMJ showcase at Trans-Pecos on 10/24 with Moon Duo, Amen Dunes and Marissa Nadler (tickets), Dream Police will play a release show for their debut LP on November 8 at Saint Vitus. Ticket info coming soon. All dates are listed below.

Dream Police have also put out the first single/title track from the album, "Hyponotized," which, as the LP teaser suggested, is a more experimental affair than The Men's recent output. It brings brooding post-punk, bright synths, and riffy guitars together for a truly interesting mix. Check it out below. The LP is due out November 11 via Sacred Bones.