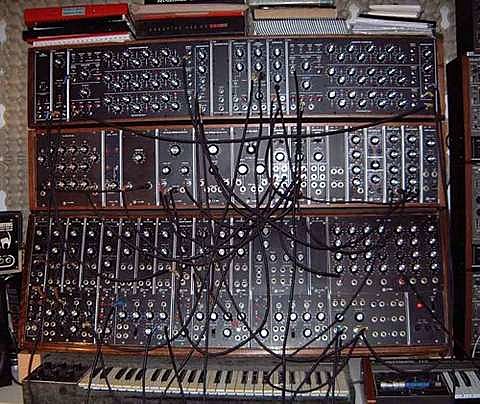 Happy summer solstice! And what a way to kick off the season, it looks like it's going to be well into the 90°s today. Death by Audio will be celebrating it tonight (6/20) with Modular Solstice, a night of all modular synth performances by musicians who are or were involved in a project which uses analog electronics. (Let's hope for the instruments' sake DbA's A/C is up and running.) The lineup for tonight's show includes Drew McDowall (CSD, ex-Coil and Psychic TV), Mark Dwinell (member of Forma), Matthew Regula (member of Telecult Powers), Nathan Cearley (member of Long Distance Poison), and Jesse Derosa (member of Grasshopper). Doors for tonight's show are at 8 PM, first set at 8:30. Admission is $7.

Drew McDowall spoke to WFMU about what he's been up to and they touched on the DbA show, in addition to some other future plans:

You're playing the Modular Solstice Synthesizer show on Wednesday at Death By Audio in Brooklyn, what can you tell me about the instrument you will be playing? Lots of gear fetishists want to know, I'm sure.

As this is the first solo show that I've done I wanted to to make it even more exposed and solitary so it's going to be modular synthesizer. No other instruments. You'll have to come to see what it is.

Putting the finishing touches to the next Compound Eye and CSD records. I've started collaborating with a few other people and doing remixes too. I'm doing something with Nicky Mao from Hiro Kone, i'm excited about that.

You can check out some videos of Captain Sons and Daughters (CSD) from their St. Mark's Church show in 2008 below.

Each artist performing at Death by Audio tonight has offered a one to two sentence description of their set. A couple of them actually sounds like it's about the music, but they're all pretty fun to read. Check them out below.

Matthew Regula (Telecult Powers) - "Piloting a flying carpet made from the seat of his pants. First there is a mountain, then there is no mountain, there there's THIS"

Jesse Derosa (Grasshopper) - "Somber fanfares from the court of the sunken city."