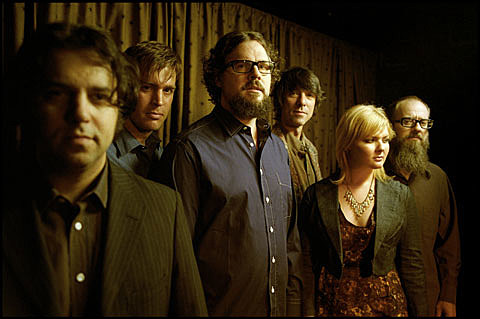 2010 isn't even half over (that happens on July 2nd) but there's already a NYE show to put on the calendar: Drive-By Truckers and special guests will play a December 31st show at Terminal 5. Tickets go on AmEx presale Wednesday at noon. General sale starts Friday, June 11th at noon. Heads up on the fact that the price goes up with time ($35 Early Advance Tickets / $45 Limited Advance Tickets / $55 Advance Tickets / $60 starting Dec 29). They're also on sale now through the band.

Drive-by Truckers have North American shows through the summer (some with Tom Petty) and dates in Europe this fall.

Their album The Big To-Do came out earlier this year. The video for their song "This Fucking Job" (or cleanly "Working This Job") comes in two versions with different endings. It's directed by Scott Teem and stars Ray McKinnon (Deadwood, The Accountant, Blind Side, O Brother, Where Art Thou?), who writes the following:

"A friend turned me on the DBT's over a decade ago. I went mad for what they were doing. Not long after someone turned them on to my film, THE ACCOUNTANT, of which they claim to still like. And so, we were mutually admiring without knowing each other. Eventually that changed and I have had their music in three of my succeeding films including THAT EVENING SUN which I produced. Patterson particularly, has become a good friend and when I was approached to be a part of the collaboration in the making of the video, I could not refuse. They have all been such champions of my films so more than anything, I (and Scott Teems) wanted to do something that they would dig... Drunk or sober. They seem to like it. The video shoot was a fair amount of shooting from the hip. We were making some crucial decisions on the fly. Damned exhilarating, it was. But nervy too. Lunch was brought in but I couldn't get "Burger World" out of my mind after seeing the video cop enjoy his burger so much after shooting me (or arresting me). So that's where I went. A last meal of sorts. A damn fine burger, too." - Ray McKinnon

The videos and all tour dates are posted below...