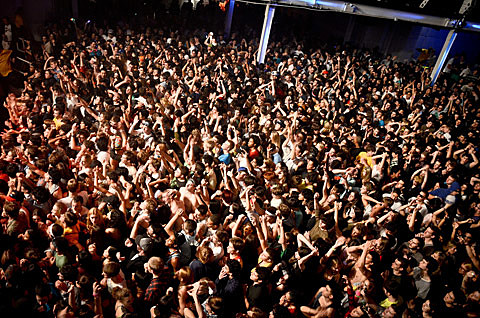 Tickets go on general sale at noon for the December 30th Drive-By Truckers show at Brooklyn Bowl. Tickets are still on sale for their New Years Eve show at Terminal 5 too.

Tickets for the Roots at B Bowl on New Years Eve are sold out, but you can still buy your way in to Questlove's DJ set taking place one night earlier after the Drive-By show..

The Pietasters play Brooklyn Bowl on February 12th. $5.00 Tickets are on sale.

The Funky Meters, which is the continuation of The Meters, Art Neville and George Porter included, will play three nights at Brooklyn Bowl in February. Tickets go on sale at noon for February 15th, February 16th and February 17th.

Yelawolf just played as part of a big Thanksgiving weekend bill at the big Terminal 5. You can catch him in a more intimate and headlining setting when he plays SOB's on December 22nd for just $10.

Nicki Minaj played a huge NYC show on Thanksgiving. She plays another one ON CHRISTMAS, but this time up at the Paradise Theater in the Bronx. Tickets are on sale.

Levon Helm just played two big shows at Beacon Theater in NYC. He and his band return to the area to play The Wellmont Theater in Montclair on February 11th. Tickets go on sale Friday at noon.

Tickets are on presale for the upcoming Allman Brothers shows at Beacon Theater.