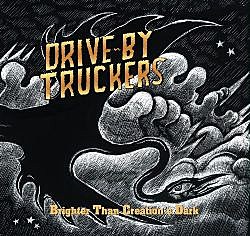 Not only is this our finest album, but it sounds better on vinyl by an even bigger margin than any of the others. It was written, learned, played, mixed and mastered for vinyl. It's how it was meant to be heard and it shines like Rain Dance Car Wax on a 69 Camarro. It may not be as fast around the curve as your modern hybrid but that long road trip will be as fine a ride as you ever experience. As a bonus, an included MP3 will provide the digital impetus to make you iPod quake with it's fine sounds and it is pretty fine in that format also. Best of both worlds, vinyl sound, big beautiful packaging and portable iPod sounds for a hopefully reasonable price. Gatefold sleeve to separate what needs to be separated. Big Beautiful artwork by Wes Freed seen in the size it was intended to be seen in. Technicolor horizons. Indeed. [Drive By Truckers]

Brighter Than Creation's Dark is out January 22nd on New West Records. New songs are streaming at MySpace.

1. IRON AND WINE - THE SHEPHERDS DOG - An incredible album that rewards multiple listens and my pick for the best album of the year.

2. RADIOHEAD - IN RAINBOWS - My close pick for second favorite. After all the hype of how it was released (or not), the album stands on its own as their best work since Kid A, maybe better.

4. VIC CHESNUTT - NORTH STAR DESERTER - I've been saying this is his finest since West of Rome (1992) but upon further listening, this is his best album ever.

6. WHITE STRIPES - ICKY THUMP - Their finest album yet. inventive and a total blast.

8. PORTER WAGONER - WAGONMASTER - Thank God, he got to make this album before his sad departure this year. Kudos to Anti Records and Marti Stuart for making this happen.

9. BO BEDDINGFIELD AND THE WYDELLES - CLEARGREEN - Hard to find, self released EP from Athens GA. Well worth seeking out for great writing, singing and playing.

Patterson also went on to mention "WILCO - Austin City Limits Taping , Austin TX 9/15/07". He said, "As fine as their new album is, they're even better live." I couldn't agree more. I haven't made a list of my favorite shows of 2007 yet, but if and when I do, that one will be on it (I was lucky enough to be in attendance - they taped it at the same time as this year's ACL Festival).

Drive By Truckers are touring in 2008. They'll play Terminal 5 in NYC on March 26th during the second half of their tour. Tickets go on sale Friday. The Felice Brothers will be touring with the Truckers, but only on the first-half of their tour - aka they will not be at Terminal 5, but New Yorkers wanting to catch the Brothers can do so on February 1st @ Mercury Lounge. Tickets are on sale now. 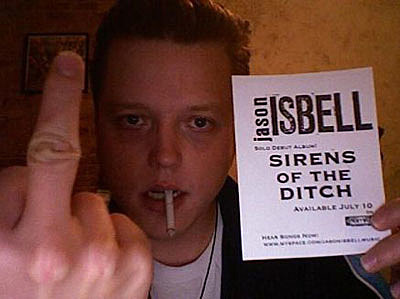 Former-Trucker Jason Isbell also has a bunch of shows coming up - some of them as part of a tour with Will Hoge. Together they play Bowery Ballroom in NYC on February 21st. Dawn Landes is also playing that show, and joining them on part of the tour. Tickets are on sale. Jason is also taking part in the New York Guitar Festival on January 12th.

It's at the World Fincial Center, and FREE. All dates below.....

The Felice Brothers - Roll on Arte