"Drive Like Jehu set was great. Hoping for more gigs & that this is not a one off despite what John Reis says. Worth 3.5 hour drive. sinews!" - Toddrick Spalding

"Wow Drive Like Jehu just sounded amazing. Like no time had passed. And with Rob Crow from Pinback joining. They need to tour. No question" - P Squared

"Words I never thought I would ever get to say: 'Drive Like Jehu sounded amazing live.'" - Luke Sigler

"Pretty sure Drive Like Jehu just played the loudest show in the 99-year history of the Spreckels Organ Pavilion. " - Matthew T. Hall 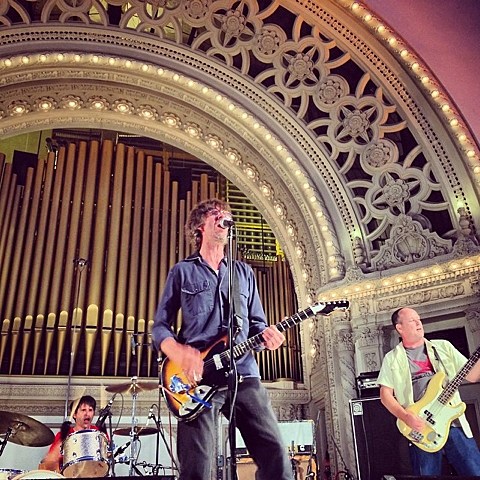 Legendary, influential post-hardcore band Drive Like Jehu reunited for their first show in 19 years last night (8/31) in their hometown of San Diego. The free show, which they're saying was a one-off, happened in Balboa Park and was a chance for them to perform with the outdoor venue's Spreckels Pipe Organ (played by organist Carol Williams), one of the world's largest pipe organs and one that's been used for concerts since 1914. Their 5-song set included four songs from their final album, 1994's Yank Crime, as well as one from their 1991 self-titled debut. For their closing track, "Luau," they were joined by Rob Crow of fellow San Diego band Pinback. The show streamed live online last night, and you can now watch videos of the entire show, with the setlist, below.

Though they're saying that's the only Drive Like Jehu reunion show (but our fingers are crossed that it won't be!), the band has members in other bands including Hot Snakes who play Riot Fest Chicago in September, Rocket from the Crypt who play Fun Fun Fun Fest in November, and others.

SETLIST
Do You Compute?
Super Unison
Sinews
If It Kills You
Luau