photo: Dropdead at Acheron in 2013 (more by Fred Pessaro) 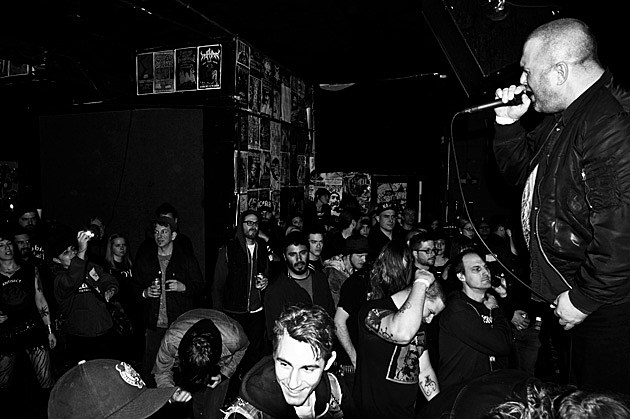 Providence hardcore vets Dropdead have been at it since '91 and they still have most of their original lineup. Their most recent release was last year's split EP with Brainoil (recorded during the same sessions as their 2011 split with Converge) which has them sounding as ripping as ever. Check it out below.

Dropdead will be in NYC tonight (2/25) at Acheron for the Brooklyn installment of Acheron D-Fest with Creeping Dose, Narcoleptics and Grudges (tickets). Acheron D-Fest also has a Mexico show on Saturday (2/28) which Drophead headline with different support.

Then in March, Dropdead will hit the road again with the great Fucking Invincible and V-Sect. That tour hits NYC once again at Acheron on March 27 (tickets TBA) and also includes a Saturday Matinee at ABC No Rio on March 28 with Mad Diesel and NoWay as openers too. That night they play an Elks Lodge in Ridgewood, NJ.

All dates are listed, with the EP stream, below...