Dropkick Murphys have announced a new acoustic album, This Machine Still Kills Fascists, which was made entirely using Woody Guthrie lyrics, set to new music. The closing track, "Dig A Hole," features an actual Smithsonian Folkways recording of Woody set to a new full-band recording by the Dropkick Murphys, and Woody's grandson Cole Quest on Dobro guitar and backing vocals. The album also features a duet with Nikki Lane (on "Never Git Drunk No More"), guest vocals by Evan Felker of Turnpike Troubadours (on "The Last One," which also features Cole Quest on Dobro), and founding Carolina Chocolate Drops member Dom Flemons on harp (on "Ten Times More," "The Last One," and "All You Fonies"). The album comes out September 30 via the band's own Dummy Luck Music / [PIAS] (pre-order) and lead single "Two 6’s Upside Down" arrives on July 6. They also made a documentary for the album, and you can watch a trailer for that below. The band says:

This is a special ACOUSTIC ALBUM we wrote around previously unpublished lyrics by one of our idols, WOODY GUTHRIE !! That's right - there's not a guitar amplifier on this album!! PLUS we're doing our FIRST EVER ACOUSTIC THEATER TOUR to bring these new songs - plus all your DKM faves - straight to you in your hometown.

A bit more background on the album... First off, Woody Guthrie embodies the spirit of true rebellion. Always one to stand up for the working man, and to fight the good fight against fascism. As his famous guitar so boldly declared - THIS MACHINE KILLS FASCISTS... And this isn't our first collaboration with him. Back in 2004, we found an unpublished lyric in Woody's archives called "Shipping Up To Boston," and turned that into a song you may know... With Al Barr on hiatus, the rest of us wanted to record, but not do a typical DKM album without him...so we figured this was the perfect time to reconnect with Woody's words. And we can't wait for you to hear it !!

"The project has been a long time in the making," vocalist Ken Casey says. "Nora Guthrie thought her father would’ve got a kick out of us, would’ve liked us, that we were somewhat kindred spirits so to speak, which to us was a huge honor."

"Nora gave us the privilege of going through the archives and selecting some lyrics to use," guitarist James Lynch adds. "The common thread that I see through everything was this love for people and this understanding of the universal truth that there is no one person fundamentally better than another person."

Nora says, "I collected lyrics on all kinds of topics…lyrics that seemed to be needed to be said – or screamed – today. Ken Casey is a master at understanding Woody’s lyrics, which can be complicated, long, deadly serious, or totally ridiculous. DKM is capable of delivering them all."

Dropkick Murphys have also announced an acoustic tour supporting the album, with direct support from alt-country singer Jamie Wyatt (who will fill Nikki Lane's role for "Never Git Drunk No More" each night) and additional support from Jesse Ahern. The tour hits Brooklyn's gorgeous Kings Theatre on October 24. Tickets go on sale Friday (6/24) at 10 AM with presales beforehand. All dates are listed below. 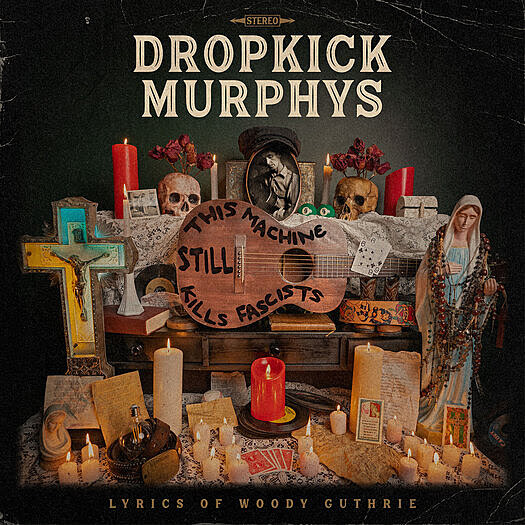