Dru Barnes in recovery (via NBC) 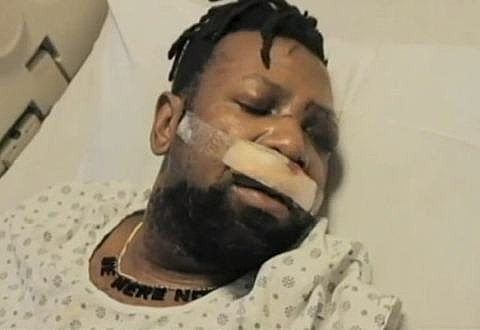 A musician from Brooklyn, New York, is recovering following a horrific attack that took place in broad daylight last week, leaving him blind in one eye.

Dru Barnes, 34, was walking home to Fort Greene from a friend's house in Bedford-Stuyvesant Thursday morning following a party when he got lost.

Police believe Barnes' assailant followed him for a block before he bludgeoned him with a hammer to the head...

...The incident took place at around 10am Thursday morning in front of 934 Jefferson Avenue, where police say Barnes was approached from behind and struck several times in the head.

Responding officers recovered the hammer used as a weapon in the attack and obtained surveillance footage from nearby cameras, NY1 reported.

Police have yet to determine a motive, but they do not believe it was a hate crime or a robbery gone awry. - [Daily Mail UK]

UPDATE: NYPD have released (blurry and dark) video of the alleged assailant, which you can watch at NY1.

Thankfully, Dru Barnes (a member of JOGYO) didn't suffer any brain damage from the attack but still has multiple surgeries ahead. If you'd like to help with Dru's medical bills, a fund has been set up.

Get better, Dru! An NBC report on the story is below.