"I wonder how guarded these drug amnesty bins will be at electric zoo?
Cause I want one." - Brian Christopher 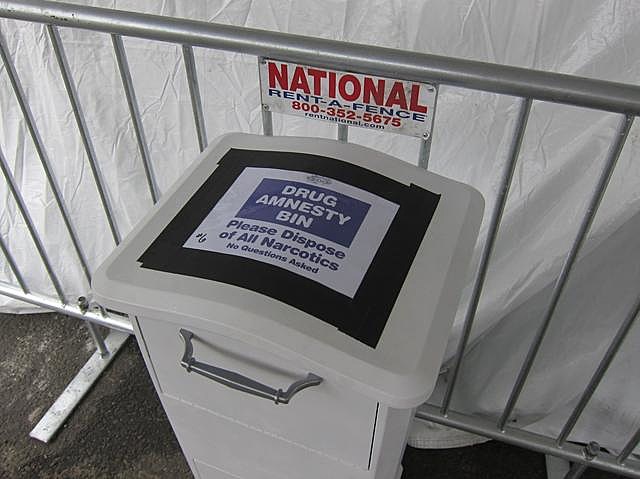 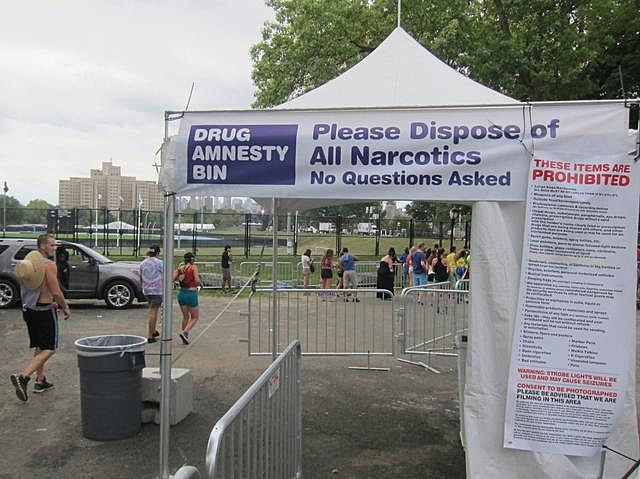 photos by Scott Lynch for Gothamist

As you probably heard on the news, NYC EDM festival Electric Zoo, went down without a single reported overdose over the weekend. This may have been in part due to their major effort to educate people and stop drugs from getting in, and maybe.... thanks to the drug amnesty bins that were placed on premises. I wonder if anyone really dropped anything in to one of those. More pictures like the two above by Scott Lynch, at Gothamist.

Electric Zoo was not without its problems though. Its third and final day was shut down early due to fear of rain. Many have taken to Facebook to voice their frustration, where so far all the fest has said is: "Many of our fans have asked about refunds for today's show. We appreciate your patience. More info will be posted soon".

One angry comment on their page has been liked over 450 times, and reads:

Today was my fiancé and I's 2 year anniversary. If it weren't for our good friends, you'd have ruined it. Thanks for nothing. And if you delete this comment, I'll make it a review. Also: your security is horrid. Imbeciles in red shirts roving around looking for people stumbling over themselves (i.e. everyone dancing). You made my fiancé go to the medical tent (front for the NYPD) and detained her for over and hour in handcuffs without asking me (her fiancé), what the situation was. She had only had two drinks, but tripped on the ledge of the barrier at GRiZ while walking backwards. You bruised both her arms (we have pictures!) and only released her after finding out I was in the military. Your red shirts went from telling me to "Go f!%# myself to thanking me for my service." Awful. Shame on all of you.

There were about six hours of music remaining when the event was called off, and organizers emphasized there would be no re-entry. Sunday's storms passed within an hour, leading many fans to lambast organizers on social media for jumping the gun, especially as the Made in America festival soldiered on just two hours south in Philadelphia. But the risk of pushing through the inclement weather was probably too high. (Remember what happened at the Hudson Project in July.)

Still, eager to make the most of the long weekend, many of the DJs who were scheduled to play Sunday night -- Kaskade, Bingo Players, Fedde le Grand -- took to Twitter to assure fans they were in talks with city clubs to play make-up sets. Slake, a relatively new venue near Penn Station, scooped the most impressive last-minute party lineup with a bill that included What So Not, Chase and Status, Heroes x Villains, Milo & Otis, LOUPVCK, Netsky, Mat Zo, Alex English, and more. Tickets reportedly sold out in less than 30 minutes. Elsewhere, Fedde le Grand performed at Pacha and ATB played club Marquee.