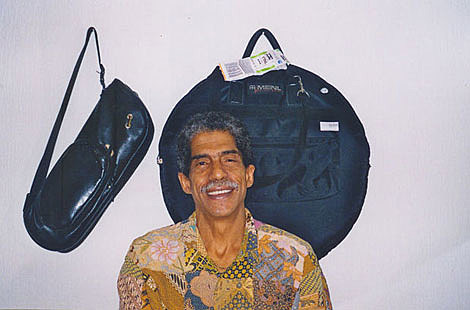 Domino are very sad to hear the news of the death of Steve Reid, who passed away in his sleep last night after a battle with cancer.

Steve Reid was a giant of a drummer, who began playing professionally at the age of 16. His first recorded work was with Martha And The Vandellas, working in the Apollo Theatre House band, under the direction of Quincy Jones. Over the years Steve recorded and played with artists such as Miles Davies, Fela Kuti, James Brown and Sun Ra, amongst other musical legends.

Domino had the pleasure of releasing The Steve Reid Ensemble's Daxaar album in 2007 and Steve's groundbreaking works with Kieran Hebden, the albums The Exchange Session Vol. 1, The Exchange Session Vol. 2, Tongues and most recently, NYC. Our thoughts go out to Steve's family, friends and 'musical soul mate' Kieran Hebden who had these words to say: "Steve was one of my great friends and the most wonderful musician I have ever encountered. The music and adventures we shared have been some of the most happy and meaningful experiences I've ever had. A true inspiration. He lived a great life and gave us incredible music. I'll miss him forever."

RIP Steve. Check out some videos below...