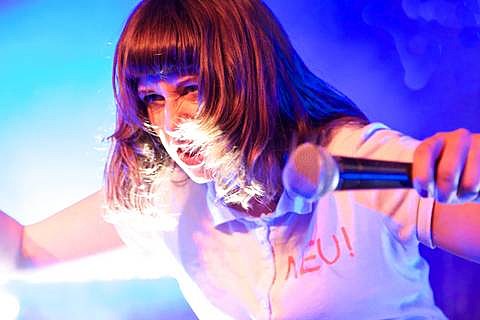 The 10th edition of M for Montreal happens next week (November 18 - 21) and among the many options is the BrooklynVegan showcase Saturday, November 21 at Club Soda with Duchess Says, Chocolat, Country and Organ Mood. That show is being co-presented by Heavy Trip, Blue Skies Turn Black, and CMJ and tickets are on sale now. If you're going to be in Montreal, we'd love to see you there.

Electro-punks Duchess Says have played BV showcases at SXSW, CMJ and M in years past and they remain one of the most fun, in-your-face live bands in Montreal. (To say that singer Annie-Claude is a livewire is a bit of an understatement.) This year they released a split single with likeminded Belgians Le Prince Harry featuring three new songs and you can stream that below.

Chocolat were in NYC not too long ago for CMJ and I caught them at Cake Shop. While what they do can be distilled to "psych-garage," that really doesn't do them justice. One minute they're all heaviness and in-the-red levels, but then out of nowhere will come otherworldly harmonies, gossamer glam or krautrock grooviness. They do it all well and it all works together. You can stream their underrated 2014 album Tss Tss below...but they're even better live.

Fronted by artist and cult restauranteur Beaver Shepard, duo Country make what they call "sleaze-wave" which they then further describe as "My Bloody Valentine mixed with Dance Dance Revolution." You can stream Country's 2014 album, Failure, below.

Another duo, Organ Mood, open the night. Heavy on vibey, soundscapey synths (they are a well-named band), Organ Mood also invite an unusual level of interaction with the crowd, inviting folks up on stage to manipulate their equipment. They released Comme si nous étions déjà libres ("As If We Were Already Free") this year and you can stream that below.

There are lots of other M for Montreal shows over its four days (Grimes, The Dears, She Devils, among them) and the full lineup is here. Flyer for the BV M4M showcase is below. 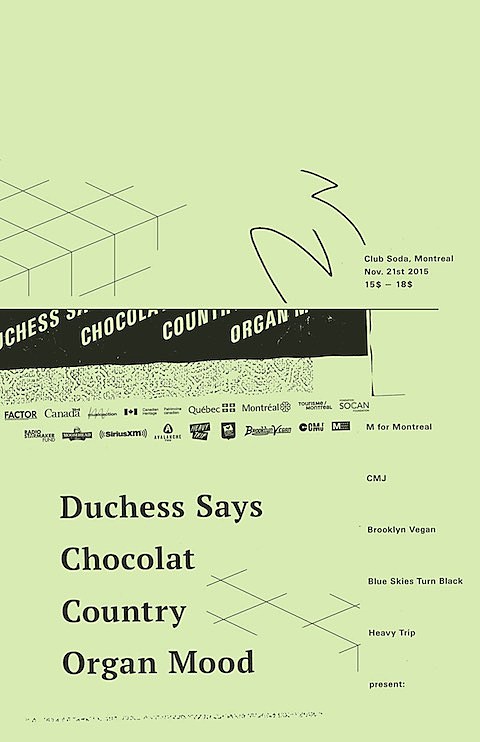