Buckshot and General Steele at Red 7 (more by Samantha Marble) 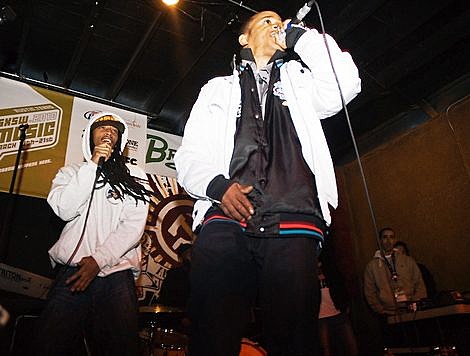 Memorial day weekend begins with two turntables and a mic. Billed as the "IT'S OK TO WEAR WHITE AGAIN" Party, Duck Down Records will gather up Buckshot with Sean Price, Sabzi of Blue Scholars, Team Facelift (Fat Jew, Fonda, Machine & DJ Tommy Mas), Kick Drums, Jasmine Solano and DJ Nire for a show at Le Poisson Rouge on May 27th. Tickets are on sale. The show is about a month and a half before Duck Down celebrates their 15th anniversary at BB King's. Tickets for that show on July 13th are still on sale.

Buckshot will also join Evil Dee, Smif-N-Wessun, De La Soul and others at the Brooklyn Hip Hop Fest in July.

In other hip hop show news, Nappy Roots are welcoming The Pursuit of Nappyness on June 15th, and will the the road for a string of US dates that include Mercury Lounge on July 23rd. Tickets go on sale Friday, 5/21 at noon. More dates below.

Chris Palko (aka Cage) will play BB King's on June 18th as part of a tour kick-off that'll take the MC out on a US tour through mid-July. Tickets are on sale. All dates below.

Keith Murray will play Southpaw on June 3rd with a backing band and the great CL Smooth as support. Tickets are on sale.

All Cage and Nappy Roots dates and some videos below...