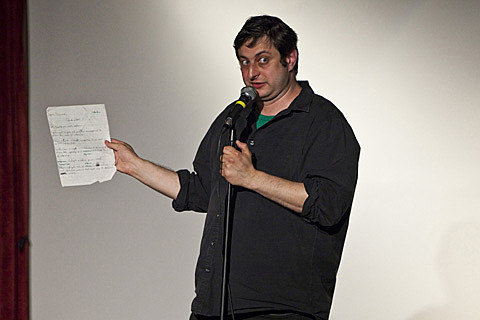 I mentioned some upcoming comedy-type events yesterday, but here are a few more shows of note that I forgot to mention. On Wednesday August 1st, 826NYC will play host to an event called 826NYC Presents Dueling Bingo. 826NYC is a nonprofit organization dedicated to supporting students ages 6-18 with their creative and expository writing skills, and to helping teachers inspire their students to write. At the event, whose goal is to raise money for 826NYC and their various endeavors...

There is a $25 registration fee and you must raise at least $100 to qualify for play. This event floats my boat on three levels. First off, I am a huge proponent of literacy in young adults and children. True imagination and articulate minds are a dying commodity and if we don't perpetuate the cycle of literacy we don't have much of a future people. Second, good line-up! Scott Adsit dude! Eugene Mirman! The voice of Peggy Hill! NO DOUBT this is going to be hella fun. Lastly, I LOVE BINGO! Back when I was a young man living in small town USA I used to sometimes go to my local Elks Lodge on Bingo night and play along with the old timers. They were a quiet lot when the numbers were being called, but between games and during snacktime... man, the stories they'd tell! They even let me take pictures during gameplay one night back in 1998. Instill the desire to learn in the young and respect your elders people!

Not feeling charitable but still want something funny to entertain yourself with on August 1st? Then perhaps you should head over to the Bell House! For on August 1st, the Bell House will play host to TELL YOUR FRIENDS! SUMMER FUN SPLASHTACULAR! The show will be hosted by the great Liam Mceneaney and feature Janeane Garofalo, Wyatt Cenac, Todd Barry, and musical guest The Starlight Girls.

Symphony Space, where I suffered permanent hearing damage during a Melvins/Keiji Haino live scoring of Cameron Jamie films, is a wonderful place with fantastically diverse programming. Comedy is a solid part of their repertoire and has been for quite some time. The comedic tradition continues on Tuesday July 24th when they present another in their ongoing and absolutely fucking hilarious series Uptown Showdown, this time featuring Kristen Schall, Kurt Braunohler, Christian Finnegan, Myq Kaplan, Bob Powers, and Matthew Love this time debating the topic of BABIES vs OLD PEOPLE.

Every other month Uptown Showdown brings together two teams of comedians, writers and performers to go head-to-head on a variety of topics, such as which pet is superior cats or dogs and is it better to be comfortable or fashionable? Debaters will argue these lingering questions, drawing from historical fact and personal opinion in equal measure, and with plenty of audience participation. Forget about school reform and health care, these issues, heatedly argued by some of the funniest, smartest, intensely wacky creative thinkers around, are the topics that keep us awake at night....in a good way. Winner decided by the audience.

Tickets to this awesome show are on sale now. But don't dilly-dally. Get one or several ASAP! Symphony Space is such a great place to see a show; comfy seats, perfect sightlines no matter where you are, clean lavs... the works!

Last and least, we're sad to hear that Kristen Schaal is moving to LA (so catch her in NYC while you can!). Six days after the Symphony Space shows she plays what will be her LAST-ever Hot Tub with Kurt at Littlefield. Her and Kurt are also at Williamsburg Park this Thursday. NYC isn't going to be the same.