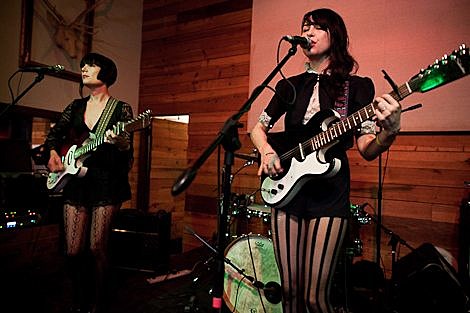 Dum Dum Girls are touring with their very good friends Crocodiles in June and July along the West Coast (Dum Dum frontwoman Dee Dee is married to Brandon from Crocs, who played as part of the band at their first show in 2009 and on their LP).

After that, Dum Dum Girls go on tour with Beach House and Vampire Weekend beginning in the end of August. That includes the three-night Radio City run. Both bands open on all three days from September 15th-September 17th. Tickets for all of those are still on sale. All dates listed below.

Beach House's summer shows also include another NYC gig - Prospect Park with the National on July 27th (that is currently sold out).

You can download two Dum Dum Girls songs - (via their label Sub Pop, "the first, 'Bhang, Bhang, I'm a Burnout,' is the second song from their Sub Pop debut, I Will Be...the second is 'Pay for Me,' which was previously only available on their Record Store Day split with Male Bonding") - here. You can download two more above.