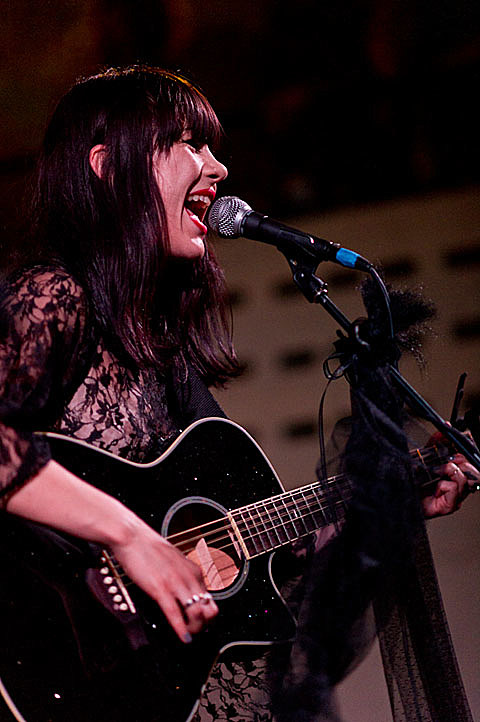 Dum Dum Girls (#40 on Rough Trade's favorite albums of 2011) may have their New Year's planned in Australia, but not before the band hits a very-recently-announced show at Brooklyn Bowl on December 1st with DIVE and Xray Eyeballs. The band will also play Late Night with Jimmy Fallon that night (actually technically earlier that day). Tickets are still available OR you can roll the dice and try to win a MEGA prize pack featuring "EIGHT free tickets and two hours of free bowling & shoes for up to 8 people!". Details on how you can enter to win are below.

Maybe Dee Dee is sticking around town too, because the Dum Dum Girl is also scheduled to bless Brooklyn Bowl with a DJ set on 12/17 as part of a reunion show for Stylofone (mems Amazing Baby, MGMT and Standing Nudes). Tickets are still available. She is also playing solo acoustic at Glasslands that same night along with an acoustic Crocodiles set. Tickets are on sale.

In related "news" a video below shows Dee Dee gushing about The Cure's great Disintegration. The Cure did NOT play that LP at Beacon Theater as part of their three night stay over the weekend. They instead focused on earlier material. The setlist from their third Beacon Theater show and all DDG tour dates and some videos and the contest below...

On The Record: Dum Dum Girls talk The Cure

--
TO ENTER THE CONTEST FOR THE DUM DUM GIRLS TICKETS AND BOWLING: Be 21+ and email BVCONTESTS@HOTMAIL.COM (subject: DUM DUM BOWLING). Include your first and last name in the email. We'll pick a winner at random and contact them with more details. Good luck!
--

THE CURE 11/27/11 at BEACON THEATER SETLIST
Three Imaginary Boys
10:15 Saturday Night
Accuracy
Grinding Halt
Another Day
Object
Subway Song
Foxy Lady
(The Jimi Hendrix Experience cover)
Meathook
So What
Fire In Cairo
It's Not You
Three Imaginary Boys
The Weedy Burton
Seventeen Seconds
A Reflection
Play For Today
Secrets
In Your House
Three
The Final Sound
A Forest
M
At Night
Seventeen Seconds
Faith
The Holy Hour
Primary
Other Voices
All Cats Are Grey
The Funeral Party
Doubt
The Drowning Man
Faith
===========
World War
I'm Cold
Plastic Passion
Killing An Arab
Jumping Someone Else's Train
Another Journey By Train
===========
Descent
Splintered In Her Head
Charlotte Sometimes
The Hanging Garden
===========
Let's Go To Bed
The Walk
The Lovecats
The Caterpillar
Close To Me
In Between Days
Boys Don't Cry