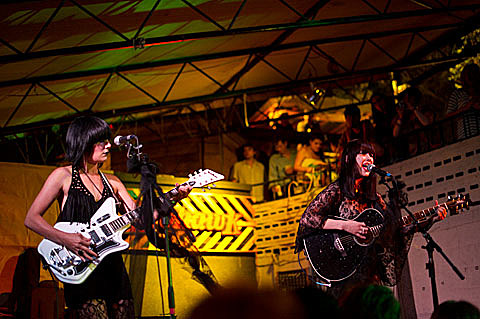 As discussed, Dum Dum Girls spent the first portion of 2012 in Australia, counting down the new year at the No Years Festival in Brisbane. Now they're set to go on a short US tour that includes dates with Widowspeak and Veronica Falls (who will be on their own bigger tour). That DDG tour hits the NYC-area twice with shows happening on February 7 at Music Hall of Williamsburg and February 11 at Maxwell's. Both NYC-area shows are with Widowspeak. Tickets for the Maxwell's show are on sale now. The MHOW show is on AmEx presale and goes on general sale at noon (1/13).

Dum Dum Girls will also play 35 Denton in Denton, TX this March before heading out on a European tour. All dates and some videos below...