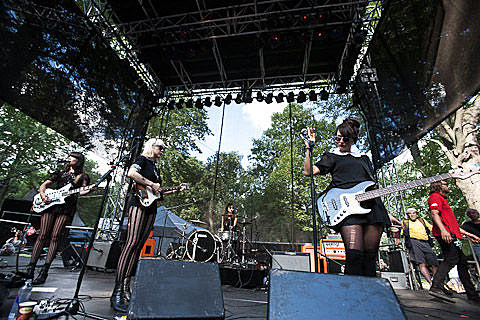 Dum Dum Girls' new EP, End of Daze, is out September 25 finds Dee Dee and the rest of the girls expanding their sound into some cool new areas. "Lord Knows," which you can download via a widget at the bottom of this post (with your email address), is a soulful "Crimson and Clover" style groover that could've been played at the Hacienda in 1990, and the EP also contains a blissed-out cover of Strawberry Switchblade's 1983 dayglo psych debut, "Trees and Flowers."

Dum Dum Girls will play an End of Daze release party in NYC at Europa on September 30 with "Special Guest" and tickets are on sale now. They'll also be opening for The Walkmen (with whom they played at Montreal's Osheaga fest) at Terminal 5 on October 18.

If you need more related music, check out SISU which is fronted by DDG drummer Sandra Vu and falls a little more on the gothy shoegaze side of things. (I caught them at SXSW.) Their new "Demon Tapes Vol. 2" EP quite good and is a "name your price" download at Bandcamp and is streaming below.

All tour dates are listed below, along with streams and widgets.