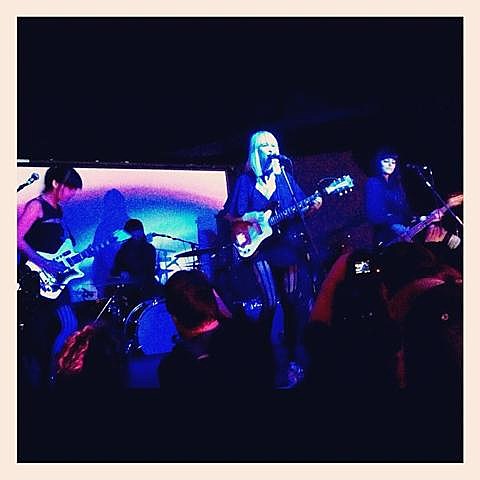 Dum Dum Girls were just through town, playing a record release party at Europa on Sunday (9/30) for their new EP, End of Daze. (They also played an in-store at Other Music on Monday.) This was the first second NYC DDGs show to feature new bassist Malia who replaced Bambi (who left to start her own band Cheap Curls). Looking a bit like Patricia Morison of Sisters of Mercy, she's been with the Girls for a while and fits right in with Sandy, Jules and now platinum blonde Dee Dee. Noo hiccups in their tight, 50-minute or so set that included pretty much everything you'd want to hear from their catalog to date, including the EP's flower-powered "Lord Knows." Dum Dum Girls set closed with a terrific cover of Pale Saints' 1989 single "Sight of You" which was a surprise to me but the band have been doing for most of the year. A great show overall, and Greenpoint club Europa (which seems to have been frozen in amber around 1980) was a cool place to see them. Video from their set is below.

If you missed the show and don't want to trek up to Terminal 5 to see them open for The Walkmen, the Dum Dum Girls will be here for CMJ, playing Stereogum's official showcase which happens on Wednesday, October 17 at Glasslands. Also playing, and definitely another reason to go to this, are new UK post-punk outfit Savages, who are making their first Stateside visit for CMJ.The rest of the Stereogum CMJ party includes Guards, Port St. Willow, IO ECHO and a DJ set from Icona Pop. Tickets are on sale now and only $5. Hard to pass up.

I'll remind you again that Dum Dum Girls drummer Sandy has her band, SISU, in town too. They played last night at Death by Audio but will play again in NYC on Friday (10/5) at Pianos with Young Boys and Suburban Living, and then at Glasslands on Wednesday (10/10) with Grooms, Royal Baths and Punks on Mars.

Meanwhile, Savages also play Mercury Lounge on October 19 with Choir of Young Believers, Daughter, San Cisco, Emma Louise and J. Thoven. Tickets are still on sale for that one too. Savages performed "Husbands" on Later with Jules Holland over the weekend and you can check out video from their appearance below.