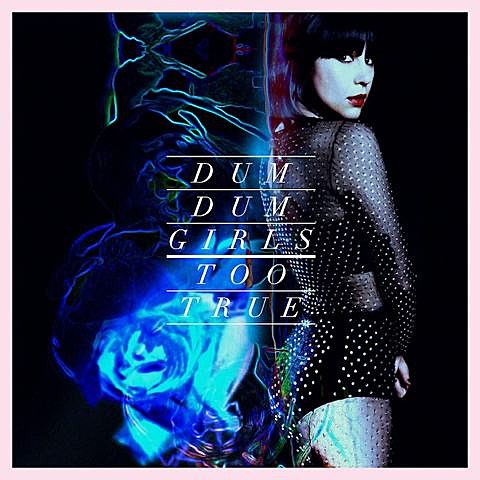 Dum Dum Girls have announced details of their third album, Too True, which will be out January 27 via Sub Pop. That's the cover art above. It's will have been a year and a half since the last DDG's release, the excellent End of Daze EP, and part of the reason for the break was to rest up from vocal troubles Dee Dee had been experiencing. As for the direction of the new album, Dee Dee talked with Stereogum recently:

It sounds like the next step from there, at least to my ears. I mean there are a couple of different things on this record. There's a lot more guitar -- textural guitar stuff -- which is why I brought on an additional guitar player for the live show. It kind of ventures into a newer, bigger... I don't know how to describe it. A bigger, rock n' roll sound or something? You know, occasionally. There's a lot more mid-tempo stuff, which I've never really done. I think historically my band is regarded as the band that does like Ramones-y songs and then drowsy ballads or something. I mean obviously that's not what I would say, but that I think there's sort of a middle ground, which is prevalent a lot on this record. I think it has to do with sort of how I changed guitar style when I was writing. I definitely was listening to a lot of big sounding records. So I think that people have noticed an evolution from more 60s rock sounds and now they might hear more English 80s, 90s brit-pop stuff. Not like I wrote down a recipe and figured out how to do it. But you know, whatever flavor you're into hearing ends up coloring the stuff you're doing.

You can stream first single "Lost Boys and Girls Club" below which goes into kinda new sonic territory for DDG and it's video -- produced by H&M clothing stores -- is very Halloweeny. You can check out that below too. As she mentioned there, DDG are now a three-guitar attack, adding a fifth Dum Dum to better bring the new record to life live. As discussed, NYC can catch them on January 30 at Mercury Lounge which will serve as a record release show for Too True. All dates are listed below.

If you need a live fix sooner, Sandy and Jules will be here with SISU, playing a free Brooklyn Night Bazaar show on December 20 with LIZZO and US Girls.

All DDG dates are listed, along with the new single stream, video and Too True tracklist, below.