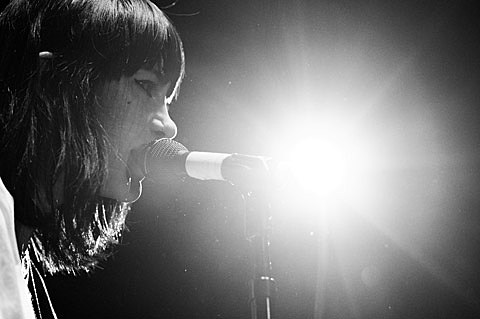 As mentioned, Dum Dum Girls are releasing their new EP, End of Daze, on September 25 via Sub Pop. The girls dropped the EP's single, "Lord Knows," back in August, and now they've got the whole EP streaming a week ahead of its release. You can listen to it below (via Stereogum).

As discussed, the band will play a release party for the EP in NYC at Europa on September 30 with Starred and Chez Deep. Tickets for that show are still available. They'll stick around after that show and play a free in-store at Other Music (10/1, 8 PM) the next day.

As discussed, Dum Dum Girls also open for The Walkmen in NYC at

And don't forget that DDG drummer Sandy's band SISU will make their NYC debut at Glasslands on October 10 with Bleeding Rainbow also on the bill. Tickets are still available.

Other Music will also host a free in-store for Niki & the Dove on September 26, also 8 PM, the day before their tour with Twin Shadow comes to NYC for a sold out two-night run.

Dum Dum Girls EP stream and a list of updated dates are below.