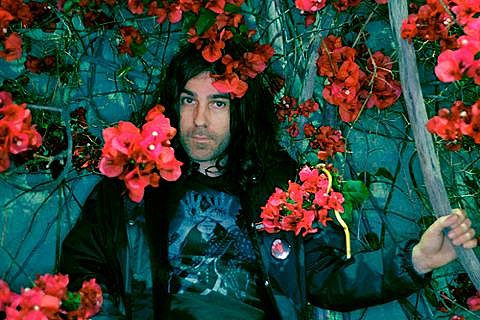 My Bloody Valentine wrap up the North American leg of their 2013 tour next month, with the last two shows here in NYC at Hammerstein Ballroom on November 11 & 12. Tickets are still available. (PS look for an interview with MBV's Kevin Shields on this site soon.) While it hasn't been listed on Hammerstein's site, opening the 11/11 show -- and a few others on these dates -- are Dumb Numbers. The band is more or less Australian musician Adam Harding who has previously played on Lou Barlow's last two solo albums. His own stuff -- and voice -- is not so far from Lou's style, but mostly played in a super-sludgy style that occasionally lumbers into doom territory.

Dumb Numbers put out their debut album earlier this year via Joyful Noise and helping Harding out on the album is an impressive cast, including Barlow, plus Dinosaur Jr. drummer Murph, David Yow (Jesus Lizard), Dale Crover (Melvins), Bobb Bruno (Best Coast), and more. Oh, and David Lynch shot the album cover (Yow did the design/layout). You can stream stream the whole album below, along with the Yow-directed video for "Redrum."

As to who exactly is playing in Dumb Numbers on these dates is not 100% clear. Murph is definitely on drums. And the band is "not sure about" whether they're opening on the second MBV Hammerstein date (11/12), so stay tuned. Their confirmed tour dates are listed, along with the album stream and video, below....

all dates supporting My Bloody Valentine