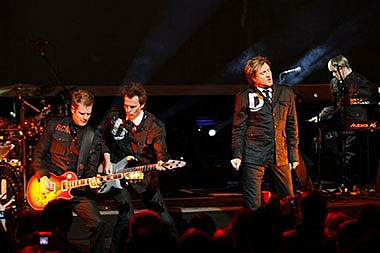 Some songs on Duran Duran's new album Red Carpet Masscre feature contributions from Justin Timberlake and Timbaland. The first single "Falling Down" was co-written and produced by Justin. The video - which mocks celebrities like Paris Hilton, Britney Spears, and Amy Winehouse - was originally filmed with semi-nude models. I don't think the X-rated version is out yet, but the toned down one is below.....

Duran Duran teamed with director and fashion photographer Anthony Mandler to produce a stylish video for their new single "Falling Down." You might remember Mandler from the mini movie he created last year for The Killers' "When You Were Young."

He pulled off something similar for this new Duran Duran video. The group was inspired by a photoshoot about models in rehab and worked to recreate that timely theme for this video. Just like their 1981 hit single "Girls On Film," the group shot both an X-rated version (with topless models) and a less risqué version of the video.

The video tells the story about a young girl model who is dropped off at a rehab center for treatment. Dressed in immaculate white suits, the members of Duran Duran portray the hospital's doctors and take care of these glam beauties. The styling of the video is amazing with the models locked up in the grimey, old hospital building like wild birds.

The video also includes a clever nod to Duran Duran's past with a famous ditty at the end of the clip. It is great to see Duran Duran back at their game with an exciting new video in which they once again tap into the current zeitgeist just like they did back in the '80s. [Arjan]

Behind the Scenes (with JT & Timbaland)