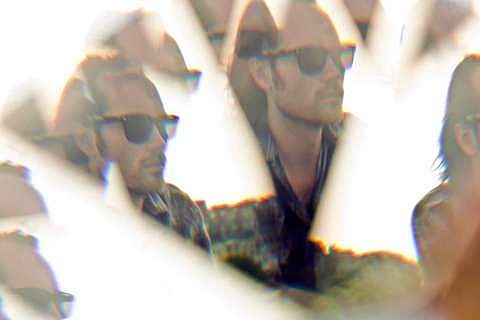 Dusted, a duo consisting of Brian Borcherdt (Holy Fuck) and Leon Taheny (Final Fantasy, Rituals, Bruce Peninsula), are set to release their debut LP, Total Dust, on July 10 via Polyvinyl in the US and worldwide and on Hand Drawn Dracula in their home country of Canada. The first track revealed from that album, "(Into The) Atmosphere" is far different than the work Brian did in Holy Fuck and sounds more like a mid-2000s Arts & Crafts band and also a bit like Arm's Way-era Islands. It's a catchy tune, falling just below the 3 minute mark, and you can check it out below, along with a teaser video for the album.

Dusted are currently on tour with A Place To Bury Strangers. They won't be at APTBS' NYC show (7/27 at MHOW) but they just announced their own NYC show, which goes down on July 15 at Glasslands. Tickets for that show are on sale now.

All dates are listed below, along with the song stream and album trailer...

Dusted - "(Into The) Atmosphere"