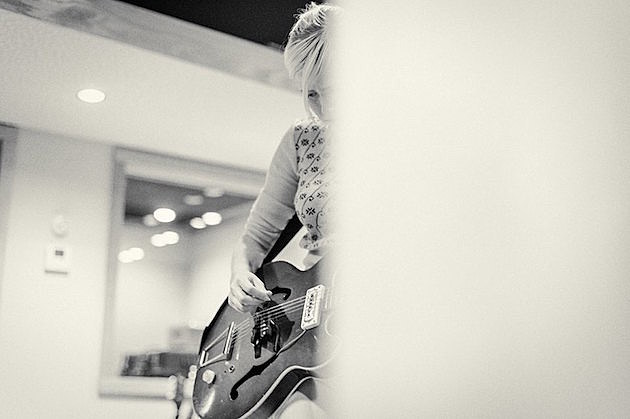 You may remember that Dutch artist Amber Arcades (real name Annelotte de Graaf) was in NYC last spring working on her new album with producer Ben Greenberg, as well as Shane Butler and Keven Lareau of Quilt, and Real Estate drummer Jackson Pollis helping out as well. She's just announced she's signed with Heavenly Recordings who will put out that album later this year. As a taster, they've offered up "Turning Light," an ethereal song with krautrock and baroque touches. If that sounds like a description of Broadcast, there's definitely some of that vibe here. Annelotte says:

I was heavily jetlagged throughout the album recording process and kept waking up at 5am. One day I went to the studio early and Keven (Lareau, who plays bass on the recordings) was there already too. He was jamming out on this krautrock-y bass line and I'd been playing with this melody in my head for a while which happened to fit over it perfectly. We wrote the track in an hour, then when Ben came into the studio we recorded it, also in an hour. I wrote the lyrics the next morning when I was again awake way too early. I think this half awake/half still dreaming energy definitely seeped into this track.

Amber Arcades will be back in the U.S. for SXSW and hopefully some non Austin shows as well. She's also got some dates opening for Nada Surf in the UK. All announced dates are listed below.