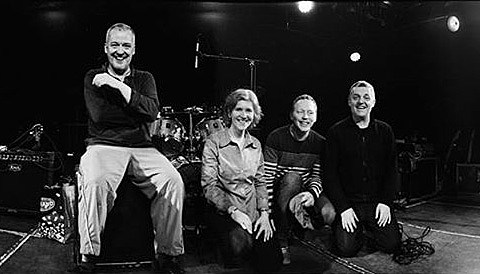 This hard-edged Dutch anarcho-punk collective adheres to only the purest ideals in rock music. Starting in 1980, the Ex uncorked an endless stream of do-it-themselves vinyl and tapes on a variety of label names (finally settling on Ex Records in '88). Following Crass' example (if not quite that group's sound; the Ex has a cutting Gang of Four rhythmic edge and something of a Fall-like declamatory style), the Ex use their work as a sonic and graphic vehicle to promote a wide range of left-wing socio-political causes. Along with the piercing and articulate punk rock, most of the Ex's albums contain vast amounts of printed material. - [Trouser Press]

Dutch anarcho/post/punk/jazz collective The Ex, which still includes founding member Terrie Hessels and Katherina Bornefeld (drummer since the early '80s), will be touring the U.S. this fall with saxophonist and frequent collaborator Ken Vandermark, for what are sure to be unique performances. (They have released two albums as The Ex & Brass Unbound, a group which includes fellow horn-players Mats Gustafsson, Wolter Wierbos and Roy Paci.) There are two stops in the NYC area: October 22 at The Wick and October 23 at WFMU Monty Hall in Jersey City. Tickets to both shows are on sale now.

The Ex's most recent release is The Ex At Bimhuis (1991-2015), a compilation from almost 25 years of history of the band at Amsterdam jazz club Bimhuis, culled from 12 different concerts and festival performances at the venue. They also have a new DVD of the three nights of "The Ex 33⅓ Years Festival" in London's Café Oto in 2012. You can watch a bit of that, plus an hour-long The Ex & Brass Unbound concert and an Rdio stream of their singles collection, below...