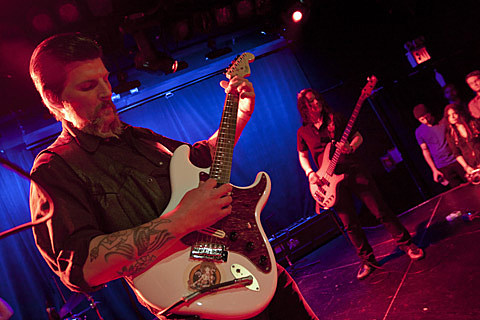 Dylan Carlson is creating his first major solo project outside of earth.There will be a limited edition lp/dvd/book and cd/dvd/book(500 of each format) and a special pressing of 150 copies(lp only) with personalized ex libris by Simon Fowler (Who will also do the cover and end papers). The illustrations will be by Kiyo Lappalainen. The limited edition books will be pop-up style. There will also be an open edition with regular flat printing in a cd booklet and flat lp printing. The recording will combine field recordings from various megalithic and other sites of human/fairy encounters across the UK, also the use of ritual and folkloric magical practices. The expedition will be filmed by Clyde Petersen. These recordings will be layered with Dylan's interpretations of classic Scotch-English ballads about human/fairy encounters from early modern England and Scotland(15th-18th century). It will also feature guest vocalists to sing the songs....The field recordings will be accomplished in April-May of 2012. The rest of the recording/mastering will be finished in summer and early fall, the artwork is an ongoing process, already begun. Dylan is planning to have it all done for a May 2013 release.

The above description details Dylan Carlson of Earth's solo project, which he's currently funding via Kickstarter (currently at about 10% of its $30,000 goal). It ends in 27 days. Contribute if you can/if interested.

In related news, Carlson is also preparing to release his new LP with Earth, Angels of Darkness, Demons of Light II, a continuation of the similarly named LP from a year ago. Look for the second installment on Southern Lord on 2/11, and stream a new song at Spin.