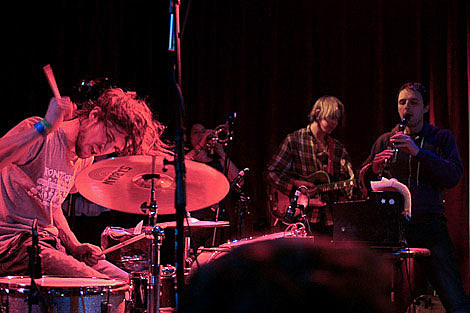 Nana Grizol's second album, "Ruth" is a potent mix of revved up melodic folk punk, laced with intricate horn arrangements and sleazy, ripping guitars. It alternates between contemplative, beautiful folk arrangements and blasting rock and roll, often within the same song. "Cynicism" kicks things off with a haunting finger picked guitar melody, mixed with a lush horn arrangement. "Galaxies" then kicks things into high gear with it's infectious swagger. "Black Box" is an album highlight, with it's urgent, tense backing of a lyrical rumination on mortality. "From Here" opens with a jubilant, group vocal, then channels Neil Young's Crazy Horse for a blazing,energetic guitar workout. "Sands" ends the album with an ominous,horn backed swell that builds into an expertly crafted pop song, leaving off on a dark but hopeful note. [Orange Twin]

Athens, GA,'s Nana Grizol are a relatively new creation, only one album into their career. But songwriter Theo Hilton and his band of E6 regulars are hardly new to the game. The band's lineup can vary, but generally includes members of Elf Power, Music Tapes and Neutral Milk Hotel (many of which appeared on the E6 Holiday tour around this time last year).

Nana Grizol's second record, Ruth, is set to come out January 12th on Orange Twin (though it's available digitally now). The song "For Things That Haven't Come" from that is posted above.

The band is touring this November, and stops in NYC on November 8th for a show at Cake Shop. Chameleon indie-pop Golden Ghost open. Nana Grizol's live show, which visited NYC with Music Tapes last March, is a raucous, team-work filled affair, with multiple drums kits, a rotating cast of horns and frontman Theo Hilton giving his all. There's a little preview in a pair of videos from Athens's Orange Twin Music Fest in October. Those clips with album info and all tour dates are below... 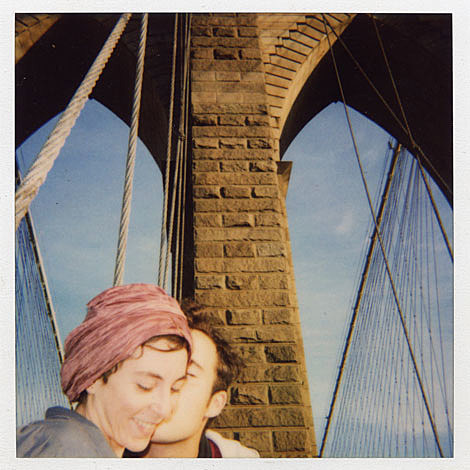