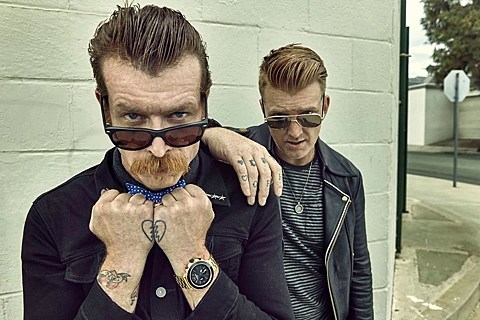 In the wake of the tragedy that occurred during their recent Paris show, Eagles of Death Metal have announced that they'll return to the city this Sunday (12/6) for a show with U2 at AccorHotels Arena. Stereogum points to a Billboard article that says Josh Homme will appear with the group, despite usually choosing to remain a studio member. U2 will play the same venue the next day. The shows are makeup dates for their cancelled November 14 & 15 shows. The article also points out that Eagles of Death Metal will reschedule their cancelled European tour dates for February.

As you may know, to raise money for the Sweet Stuff Foundation, EODM gave the foundation the publishing and master use of their song "I Love You All The Time" and they're encouraging artists to cover it. We already heard covers by Dean Ween, My Morning Jacket and Savages, and now there's one by Petra Haden of that dog. (who's collaborated with Josh Homme in QOTSA). Listen below.