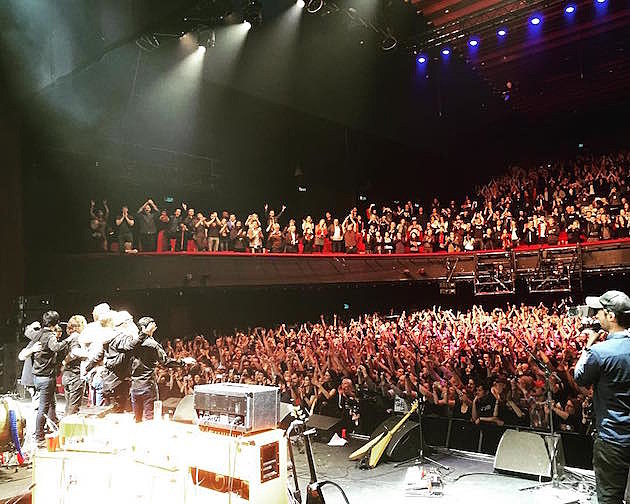 It is like attending mass rather than a concert. Hughes knows how to get the crowd going like a cable-TV preacher. "Y'all, we are here to have a good time tonight. Ain't nobody gonna stops us! Can I get an amen?" he yells in his Southern drawl. His references to the terror attack are discreet and respectful. He is not here to open wounds or make politically correct speeches but to offer catharsis through fun and a high-powered, indefatigable performance. And lots of love and rock. "I want to propose a toast. I see a room full of champions, nos amis. I fucking love you all the time." Cue the audience to sing along to "I Love You All the Time," which has become an anthem for Parisians to fight fear and atrocity with amour. - [Rolling Stone]

We mentioned that Eagles of Death Metal were returning to Paris last night (2/16) to play The Olympia, for an audience that included around 900 survivors (and family members) of the November terrorist attack on the Bataclan attack last year. The show went down as planned, though extra precautions and care were taken -- there was a large, on-site psychologist team on hand, as well as a lot of security. The show also marked a rare live appearance from EODM co-founder Josh Homme, who usually sits out touring.

Check out a bunch of videos from last night's Paris show, including Jesse Hughes covering The Rolling Stones' "Brown Sugar" as well as an interview the band did with CNN, along with the Paris setlist from the show, below.

We love you so, so hard, Paris. Thank you all for being there with us. One of the most special shows -- and days -- of our lives. #eaglesofdeathmetal #eodm #paris #nosamis #tour #live #music #lolympia

SETLIST: Eagles of Death Metal @ L'Olympia Bruno Coquatrix, Paris 2/16/2016
I Only Want You
Don't Speak (I Came to Make a Bang!)
Bag O' Miracles (Partial)
So Easy
Complexity (Boots Electric cover)
Whorehoppin' (Shit, Goddamn)
Silverlake (K.S.O.F.M.)
Oh Girl
I Love You All the Time
Cherry Cola
The Reverend
Got a Woman
I Got a Feelin (Just Nineteen)
Stuck in the Metal
Miss Alissa
I Like to Move in the Night
Secret Plans
Wannabe in L.A. (Wannabe in Paris)

Encore 2:
Save a Prayer (Duran Duran cover)
I Want You So Hard (Boy's Bad News)