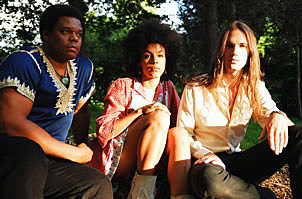 The New Yorker's own Sasha Frere-Jones, recent winner of Time Out's 'best music critic' award, keeps a running tab of his favorite music on his blog. Here's a peak at his current Top 10 2006 Songs...

Sasha's got a thing for major labels - in fact, most of his favorite 33 songs come from a major-label release. I am neither dissing Sasha, major labels, or implying that Sasha really favors them - it's just an interesting observation when you're constantly surrounded by this.

The artists on his list that AREN'T on majors stand out - especially Brooklyn's own Earl Greyhound (and I don't just mean because I bolded their name in the list above). Sasha loves the rockin' Zeppelinesque band, and it's getting them a lot of attention. He wrote in the September 4th, 2006 New Yorker:

During a recent Earl Greyhound show, one audience member turned to another and said, “Why aren’t they signed to a major yet?” “They’re still playing,” his friend quipped. Whether or not Earl Greyhound are the Next Big Thing is irrelevant—watching them will convince you that they are.

At a minimum, the praise should help Early Greyhound get that major label deal, which in turn should help them fit in better with Christina, Kelis, and Justin at the next Sasha soiree.

J from Heartonastick recently recommended the band to Gothamist readers. Extrawack said they were one of the better acts he caught at CMJ.

The Village Voice and Time Out give their endorsements too. (thx Roger)

One last thing: Please tell me that none of the blogs who posted "Chris Ott is Gerard Vs. Bear!!" really believe it. I doubt that even Chris Ott and/or Nick Sylvester - whichever one of them wrote the post that also endorses Earl Greyhound - thought people would take their sarcastic "confession" seriously.