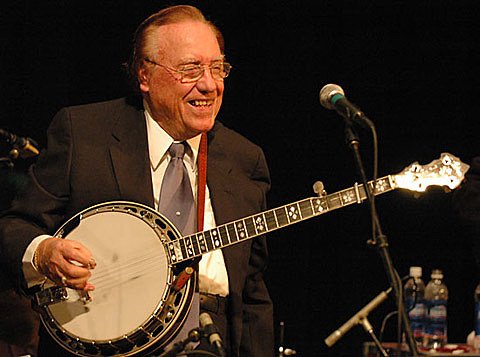 Earl Scruggs, the bluegrass banjo player whose hard-driving picking style influenced generations of players and helped shape the sound of 20th-century country music with his guitar-playing partner, Lester Flatt, died on Wednesday in a Nashville hospital. He was 88.

His son Gary confirmed the death.

Mr. Scruggs and Mr. Flatt probably reached their widest audiences with a pair of signature songs: "Foggy Mountain Breakdown," which they recorded in 1949 with their group the Foggy Mountain Boys, and which was used as the getaway music in the 1967 film "Bonnie and Clyde"; and "The Ballad of Jed Clampett," the theme song of the 1960s television sitcom "The Beverly Hillbillies." (Mr. Scruggs and Mr. Flatt also appeared on the show at times.) -[NY Times]

Earl Scruggs was a bluegrass legend. Rest in Peace. .