DIIV at Mercury Lounge in May (more by Jonathon Bernstein) 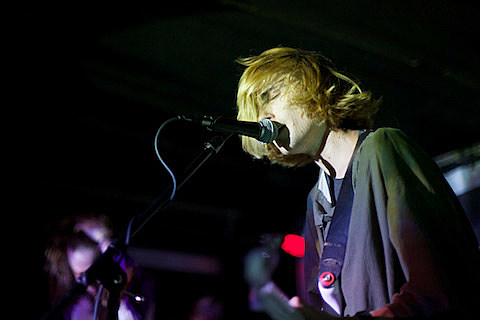 Bonnaroo began today (6/13) (and begins streaming on Friday), and unfortunately there's already been some mishaps. And now we just found out that Earl Sweatshirt had to drop off the festival (via Pitchfork). He tweeted, "To everyone at bonnaroo: im sorry i cant make it im really really fucking sick but i will make it up to tennessee as soon as i possibly can." This means his 4 PM set on Friday and his appearance at the hip hop Superjam with RZA, DJ Jazzy Jeff, Schoolboy Q, Solange, Chad Hugo and more (Friday at midnight) are both cancelled.

Meanwhile, today's weather caused DIIV's flight out of NYC to be cancelled, and they've now moved their set (which would have been today at 4 PM) to Friday at 4 PM, when Earl would have played.

Hopefully the weather doesn't mess up too much else. If you're already down there, maybe consider checking out some of the other interesting stuff besides the big names too.