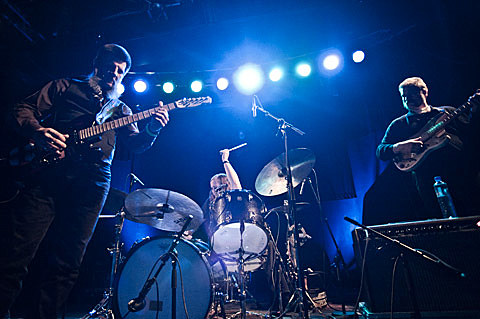 The David Lynch Foundation has two fundraising shows on the horizon, both happening at NYC's Saint Vitus. The first takes place on September 25 and features Earth, Cult of Youth, and Dream Police (the project of Mark Perro and Nick Chiericozzi of The Men). Tickets are available now. The second show occurs on October 4 and brings together JG Thirlwell & Sarah Lipstate, the Soft Pink Truth, and Dominique Leone. Tickets for that show are also available now.

The David Lynch Foundation's aim, per its header, is "Healing Traumatic Stress and Raising Performance in At-risk Populations." According to Lynch's message on the foundation's website:

In 2005, we started the David Lynch Foundation for Consciousness-Based Education and World Peace to ensure that every child anywhere in the world who wanted to learn to meditate could do so. Now, the Foundation is actively teaching [Transcendental Meditation] to adults and children in countries everywhere.

How are we able to do it? Because of the generosity of foundations and philanthropists and everyday people who want to ease the suffering of others--and who want to help create a better world.

Here are your helpers: The first date fits into Earth's tour with King Dude. Those two hit Saint Vitus the day before, September 24; a show that has subsequently sold out. Primitive And Deadly, the band's new album, will be available on September 2. You can watch a trailer for the new album and see their updated tour schedule below. Cult of Youth, too, have a new album in the works according to posting on their Facebook page: "100% done with every aspect of the new album as of a few minutes ago. I have never been more proud of a creative work in my life."

The other bill should be a noisy and synth-y affair with JG Thirlwell of Foetus and Sarah Lipstate of Noveller joining forces again after a successful run earlier in the year. Show-mate the Soft Pink Truth -- the genre-tweaking sideproject of Matmos' Drew Daniel -- recently released his giddy deconstructionist take on black metal, Why Do the Heathens Rage?, which he broke down with Invisible Oranges' Dan Lawrence. Finally, Dominique Leone offered up the footwork-inflected "running journal" 2014 on Bandcamp, adding new material back in July.

Updated Earth dates are listed, with streams from the artists, below...