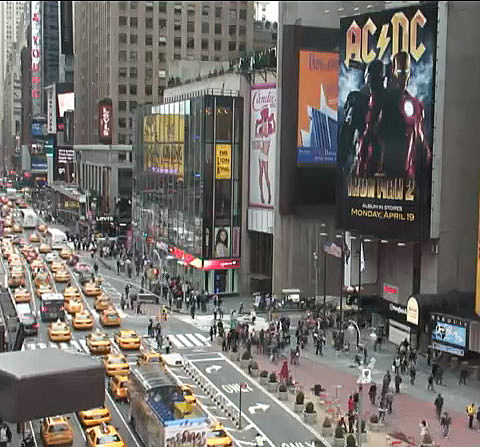 The celebration will run from 11am - 2pm. Mayor Bloomberg is expected to make his Earth Day speech at 1:15pm. A special performance by United Nations Goodwill Ambassador and musician Salaman Ahmad and his band Junoon will close the celebration.

Vice President Al Gore and Wangari Maathai will both share their Earth Day messages virtually on the screens in Times Square. Entertainment will be provided by the cast from the Broadway show Hair, Mandy Gonzalez, Elphaba from Wicked, J. Xavier,Grace Potter and the Nocturnals, Blue Man Group and comedian Aisha Tyler."

Grace Potter supposedly goes on at 11:21 [update, as of 11:26, she's still not on - also the stream sucks.... 11:35 - she's on]. There's also vendors set up in honor of Earth Day in Times Square until 4pm. " The event will take place in the newly created pedestrian plazas in Times Square on Broadway between 45th and 46th streets. As part of the celebration, the public plaza between 42nd and 43rd streets will host information booths on a variety of environmental issues."

You can watch the performances at EarthCam's Times Square Cam, and maybe on TV (or in person if you hurry).