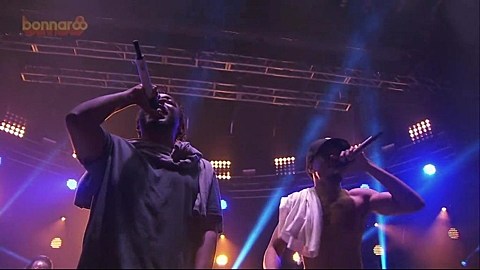 Earth, Wind & Fire bassist Verdine White had never met Kendrick Lamar until he saw Lamar and Chance the Rapper at the side of the stage during their late-night set and the band invited them out to freestyle.

"I knew who he was, but it wasn't planned," White said afterwards. "We stayed up there -- what -- 90 minutes? We were only supposed to be up there 70 minutes. You know, you just go. You don't think about it, you just keep going. He's in the band right now." [USA Today]

As the review quoted above points out, there was some generation-crossing collaboration going on at Bonnaroo yesterday (6/12) when veteran R&B/soul/funk band Earth Wind & Fire brought out rappers Kendrick Lamar and Chance the Rapper during their set. You can check out a couple videos (via Pitchfork / Fake Shore Drive) below.

There was other generation crossing when Tears for Fears covered Radiohead's "Creep" (not for their first time) at the festival. We don't have a video of that at the moment, but we hear things got pretty emotional:

Bonnaroo continues today (6/13) with the Superjam, D'Angelo, Slayer, My Morning Jacket, Belle & Sebastian, Jamie xx, The War on Drugs, and more. If you're not there, you can stream the festival live, right HERE. Check out a recap of Thursday too.