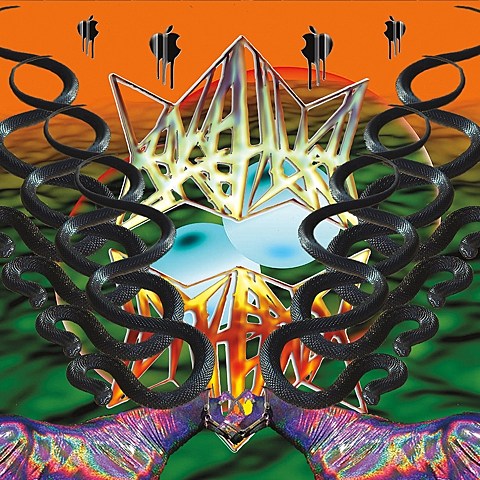 As you may know, Eartheater is the solo project of Alexandra Drewchin, who sings in Liturgy drummer Greg Fox's band Guardian Alien. She just put out her newest album, Metalepsis, this week on Hausu Mountain, and it's an out-there psychedelic record but still more digestible than the abrasive Guardian Alien. It's diverse too. Some parts are ambient pop, others are drone folk. Sometimes electronics lead the way, but other times it's stabbing guitar and other times it's lush strings. You can listen to the full thing below and purchase it at Bandcamp for $4.20.

Eartheater celebrates the new album with a release show tonight (2/26) at Secret Project Robot in Brooklyn. Extreme Animals, Haribo and HIGHLIFE are on the bill too, and tickets are available.

Meanwhile, ahead of Liturgy's tour, Greg Fox has four solo shows in NYC. First, he's playing as part of a "drum machine circle" at Shea on Sunday (3/1) with Wilted Women, Mike Sheffield, Darren Ho, Megan Moncrief, Beto Cravioto and Paul Wheeler. Then he plays under his GDFX moniker on March 4 at Trans-Pecos with Daniel Pearce / Andrew Smiley duo, Kate Henderson's Drone Acupuncture Installation and Sapropelic Pycnic (tickets). Then he has a "special solo event" on March 7 at Museum of the Moving Image (more info TBA), and finally a solo show at Union Pool on March 8.

Liturgy's tour hits NYC on April 15 at Saint Vitus. Tickets for that show are still available. No openers announced for Vitus yet, but the rest of the tour is with Sannhet (who play NYC with This Will Destroy You and Planning for Burial this week) and Lightning Bolt (who play NYC twice in May).