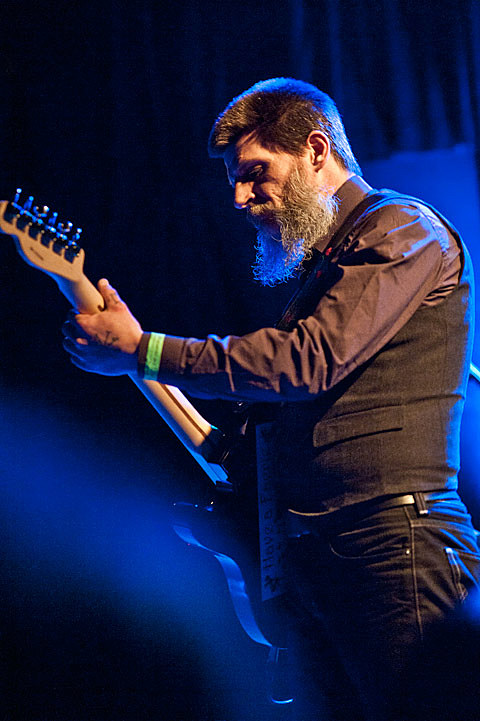 Earth maestro Dylan Carlson's solo alias DRCARLSONALBION is now streaming a slice from the original soundtrack for the movie Gold. The opening movement shimmers like heat lines on the Western horizon, presenting his marvelous guitar tone without any other instrumentation. The OST is set to receive a digital, CD, and LP release on June 17. (Preoder.)

The soundtrack kicks-off a stacked summer for Carlson. Along with Wonders From The House of Albion -- his long-awaited Kickstarted solo album -- scheduled for 2014 release, the droner will be touring with Earth throughout Asia, Australia, and Europe, leading up to a promised Earth full-length in the near future.

Speaking of live guitar wrangling, frequent Earth artist/collaborator Stephen O'Malley (Sunn O))), Khanate, Burning Witch) has been playing shows with his Nazoranai three-piece that counts similar six-string stimulators Keiji Haino and Oren Ambarchi. The touring triumvirate checked in at The Knitting Factory last night after the show was moved from The Wick. We missed it but caught their Tuesday show at Empty Bottle in Chicago.

O' Malley and Ambarchi are still in NYC and appearing at Tectonics Festival, held at Issue Project Room on Friday, May 23. $20 at the door gets you in to see the two interpret Alvin Lucier's Criss Cross and an Eyvind Kane commissioned piece where they'll be joined by Hildur Guðnadóttir. Other dates are listed below.

--
Oren Ambarchi in Nazoranai in Chicago, 5/20 (more by Joshua Ford) 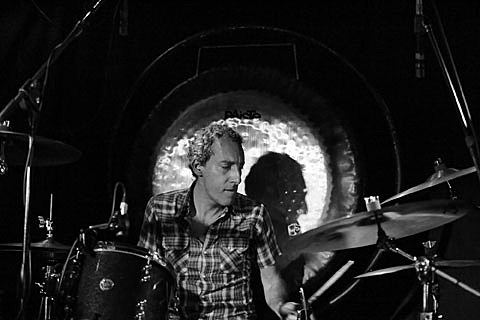 Ambarchi also has a new release coming soon. On May 27, the Australian improviser will issue a joint effort with Richard Pinhas from the cult-adored French prog beast Heldon. Titled Tikkun, the album will come out via Cuneiform Records. (Preorder.) The currently available excerpt "Washington, D.C. - T4V1" jams psych and a motorik pulse in a paint-shaker. For fans of the fried-by-acid, it sounds like a trip.

All of the tour dates, along with streams from Gold, Tikkun, and more, appear below.