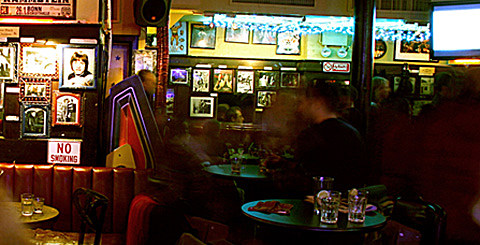 Manitoba's, the Avenue B dive bar owned by Dictators frontman "Handsome" Dick Manitoba, has been an East Village fixture since 1999. But its days may be numbered after a recent legal dispute that has them paying a hefty settlement...or face closure. They've launched an Indiegogo campaign in hope of raising $25,000. Manitoba's explains:

Due to a small wrinkle in the interplay between State and Federal law, Manitoba's was recently forced to reluctantly settle a case with a private individual for a cumbersome amount that threatens the future of the establishment.

Our backs are against the wall. Our ONLY choice, after being advised by several very competent lawyers, was to settle.

Manitoba's, its proprietors and patrons, are the very fiber of the East Village - The same East Village that is now being commoditized at an alarming rate and manifesting itself in the form of tenants in expensive apartments levying noise complaints at 8pm.

This is a battle cry for help. Please don't let Manitoba's meet the same fate as other business institutions that have recently been forced to close.

Understand this please,,,,,, this situation is not part of what you would call, "business as usual" .....It's not a fine, and it's certainly not business mismanagement. We either pay, or shut down. Not one penny goes into the owner's pockets, or is being used to pay bills. All of it goes to settling this claim and keeping the bar open.

In addition to the crowdfunding campaign, Mantitoba's says there will also be "auctions, concerts" to help raise money.

Filed Under: Handsome Dick Manitoba, Manitobas, The Dictators
Categories: Music News, NYC
Comments
Leave A Comment
Back To Top
RELIVE IT: The 2019 Coney Island Mermaid Parade in pics
Here are the 2021 Golden Globes Winners
Ian North of Milk N’ Cookies has died
Watch the trailer for ‘Poly Styrene: I Am A Cliché’
Marc Maron knows who Kevin Morby is now — watch their interview
This Week’s Livestreams (Liz Phair, The Hold Steady, Tigers Jaw, Acid Mothe…
20 New Rap and R&B Songs Out This Week