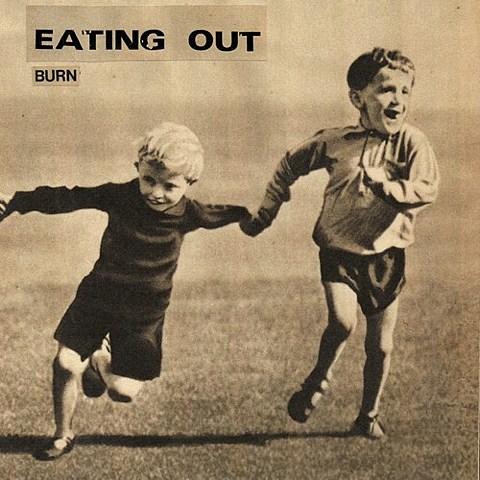 If you aren't familiar with Eating Out, there's a good chance you might be familiar with the people in the band, which includes members of Nu Sensae, White Lung, and Peace (the Vancouver band, not the UK band). The band is fronted by Nu Sensae drummer Daniel Pitout, and features Nu Sensae's Brody McKnight on guitar, White Lung singer Mish Way on bass, and Peace's Geoff Dembicki on drums.

I first saw Daniel sing when Nu Sensae opened for EMA in Brooklyn in 2012, and he came out during EMA's encore to sing a few covers with her, including one of Hole's "Miss World." That especially awesome cover sheds some light on the kind of stuff Daniel is making in Eating Out, which is much different from the gripping noise punk of Nu Sensae. The band (who are from Vancouver), tag themselves on Soundcloud as "Seattle" and "Grunge," and the video for their song "Burn" is such a '90s movie that it belongs as a bonus video on a double feature VHS of Can't Hardly Wait and Empire Records (P.S. if the right people are reading this, please make that happen).

"Burn" first appeared on a 2011 EP on Burger Records, and now they've signed to Suicide Squeeze (also home to Nu Sensae and Peace), who will release the Burn 7" on December 3. The 7" features that song, plus two other tracks, including "Come Around," which just surfaced online and can be streamed, along with the "Burn" video and tracklist, below. That's the 7" artwork above.

No shows currently scheduled for Eating Out, but as discussed, White Lung will be in NYC for a NYU show on December 5 with Ceremony, Perfect Pussy, and Sleepies. That show is free for students and $5 day of the show for the general public.

Eating Out stream and video below...

Eating Out - "Come Around"

Burn EP Tracklist:
Side A. Burn
Side B1. Come Around
Side B2. That's My Man