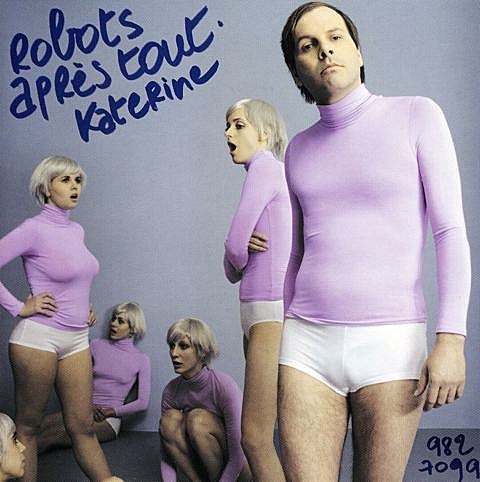 I first encountered, like a lot of records I liked in the '90s, the music of Philippe Katerine at Other Music while perusing their "La Decadnanse" section (which, sadly, no longer exists). As a fan of The Cardigans and Stereolab, his 1996 album, Mes mauvaises fréquentations, with its retro late-'60s cover art looked right up my alley. And it was. Effervescent pop rooted in French ye-ye and chanson styles, it remains a great space age bachelor pad soundtrack.

Katerine got more eccentric from there, though. 1999's twin releases, Les créatures and L'homme à trois mains were dark and twisted; 2005's Robots après tout found him tackling repetitive minimal synth; and 2010's Philippe Katerine bordered on novelty rock. That same year, he released a new cover song each week on his website, and all those have been compiled for his most recent album, 52 Reprises Dans L'Espace. He's also an actor, having appeared in Jonathan Demme's The Truth About Charlie at the Gainsbourg biopic among other rolse.

For the adventurous, his whole catalog is worth investigating which you can do via Rdio and Spotify.

Katerine will be playing his first-ever show in America in NYC as the kickoff event of The French Institute Alliance Française's Bastille Day celebration. Accompanied by his band Francis et ses Peintres, he'll play FIAF's Florence Gould Hall on July 12. Tickets are on sale now.

Check out a few Katerine videos below...