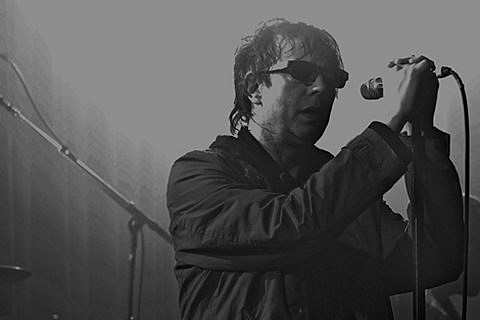 Echo & The Bunnymen will repeat themselves, sort of. The band will return to North America to focus on, like they did at Radio City, playing a full album (actually albums) for a tour that includes Irving Plaza on May 13 (the site of their last NYC appearance) and with Kelley Stoltz, who joined them at the venue in 2008 and on a UK tour in 2010... but that's where the similarities end.

Whereas the Radio City show focused on Ocean Rain in its entirety, Irving Plaza will focus on their first TWO LPs, Crocodiles & Heaven Up Here, in their entirety, plus a selection of "hits". Tickets for the NYC show are on sale in regular and VIP varieties, which include "front of the line access, a poster, and access to a designated area of the balcony". All dates below.

In related news, Kelley Stoltz was involved in a fascinating project by Sonny Smith:

Last year, local songwriter/cool guy Sonny Smith started an art project you may have heard a thing or two about: He invented 100 fake bands, wrote 100 different singles from each one (with an A side and B side!), and made art for those 100 singles.

But then, Smith and a bunch of friends began recording some of those songs... Collaborators on the project include: Ty Segall, Kelley Stoltz, the Sandwitches, Tim Cohen of the Fresh & Onlys, and others. -[SF Weekly]

Here's a bit more ridiculousity, as each single has its own post, band name, and bio (!) on the 100 Records site. I guess none of this would matter if the jams weren't interesting, but you can judge for yourself in the streaming song "I Wanna Do It" by Earth Girl Helen Brown below. The track comes from the new release Sonny Smith's 100 Records Volume 2: I Miss The Jams, out now on CD via Turn Up Records.

That song stream, all tour dates and some video is below.

Echo and the Bunnymen - A promise - Liverpool 2010

Echo and the Bunnymen - Heaven up here - Liverpool 2010