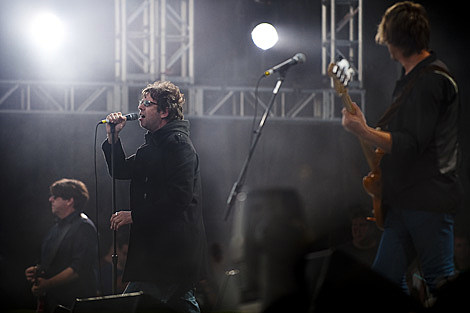 NY Magazine: A popular opinion about the Bunnymen is that, big as you are, you could have been as big as U2.

Ian McCulloch: Bands all say they want to be as big as U2, but weirdly no one ever says they're influenced by them. That's because there's nothing there, really. They've got good tunes, and you can see that it works on 14-year-olds. But I can't see mature people or kids who are looking for something, something deep--something that you just know it's art and it's going to change your life--caring. For U2 it's always flag-waving and "Yippee." That's a failing of Springsteen as well. I saw him at Glastonbury and it's like, What are you doing, climbing into the crowd? It's not a football match, it's about making someone see the light--a proper inside light.

As previously mentioned, you've got the chance to see a free performance by Echo and the Bunnymen frontman Ian McCulloch this evening (12/3) at Other Music in NYC. First come, first served. The record store show is part of a short promotional tour Ian is undertaking in NYC this week in lieu of the November Echo tour that was completely cancelled.

Last night (12/2) Ian performed at an invite-only event at the Esquire SoHo Apartment. It was said that he would be "playing acoustic tracks from the band's new album, 'The Fountain' - with guests invited to listen or even join the session."

Tomorrow (12/4) is yet another sort-of-private acoustic show, sponsored by East Village Radio, at the Studio at Webster Hall. I've got 10 pairs of tickets to give away if you want to go. Details below...

TO WIN A PAIR OF TICKETS TO SEE IAN: Email BVCONTESTS@HOTMAIL.COM (subject: Echo) with your first and last name. Ten winners will be picked at random and contacted ASAP with more details.