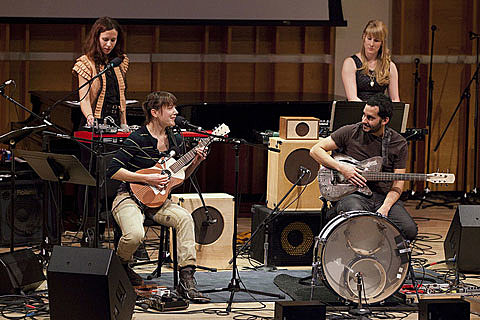 For the dozens of artists who participated in the opening marathon concert of the Ecstatic Music Festival at Merkin Concert Hall on Monday, the event was less a defining breakthrough moment than the establishment -- temporary or not -- of an uptown beachhead for a flourishing alliance normally encountered in downtown and Brooklyn spaces like Le Poisson Rouge, Galapagos Art Space, Issue Project Room and Joe's Pub.

The notion of a mission seemed too heavy for the feel of this sprawling showcase, which was meant to run for seven hours and consumed nearly eight. If there was a core statement, it could have been -- to twist slightly the title of a song by Sarah Kirkland Snider, a gifted composer to be featured in a later festival event -- "This is what we're like." [NY Times]

"The Chiara String Quartet and the Music of Nico Muhly & Valgeir Sigurdsson" happened last night (1/19), and the Ecstatic Music Festival continues tonight with a now-sold out Dan Deacon & So Percussion show. Some videos from previous shows below..