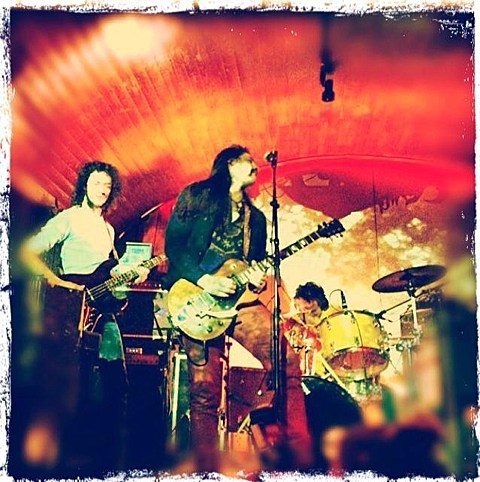 Philadelphia's Ecstatic Vision have signed to Relapse Records and will release their debut near the beginning of 2015. With that, let's get the ex-band stuff out of the way: Doug Sabolick (guitars/vocals) and Jordan Crouse (drums) both played with metalcore groovers A Life Once Lost. However, on the surface, Ecstatic Vision are hardly a continuation of that band's subtly chameleonic sound. Instead, the new quartet filled out by bassist Michael Field Connor and percussionist Muffinman trip into a void swirling with the fuzzy psych of the early '70s work of bands like Amon Düül and Agitation Free, just if they were flavored with African rhythms. Granted, that reads like a stretch -- as if a random purchase of African Scream Contest was the catalyst for a shift away from metal -- but it grows on you, mainly by using the same trance-like effect of A Life Once Lost's underappreciated last album with a better-suited set of timbres. Says Sabolick of their status and sound:

We are currently recording our debut album at various studios around Philly. The album is a great mix of trance inducing primitive African tribal meets heavy psych a la Hawkwind. We are stoked to be working hand in hand with Relapse to bring this unique album to fruition and bring our brand of heavy psych to the masses.

You can hear a track from the band's 2013 demo and watch a live video below.

In addition to the signing and the new album, Ecstatic Vision also have a number of live dates set up, including opening for Pallbearer, Tombs and Vattnet Viskar on October 28 at NYC's Saint Vitus, the second of two shows there on their tour. That show is now sold out.

All Ecstatic Vision dates are listed, with the 2013 demo and live video, below...