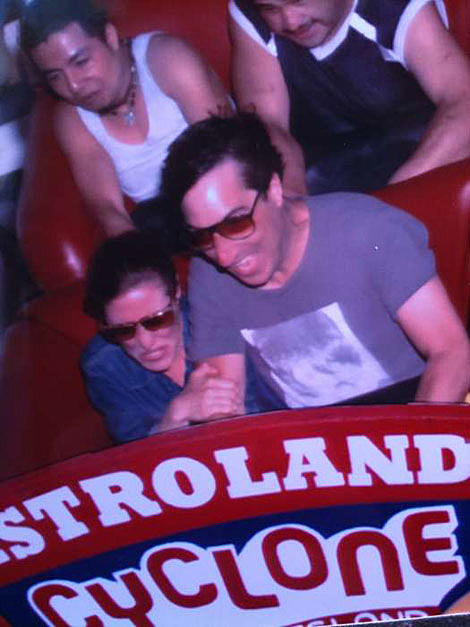 Like she will Tuesday on Letterman (tonight, 7/14), Leslie Feist joined Wilco on stage at Keyspan Park in Coney Island on Monday night (7/13) for a few songs. Edward Droste of Grizzly Bear played with them too. Collectively they performed Woody Guthrie's "California Stars". Yo La Tengo opened the show, and then also joined Wilco on stage during the encore. Pictures and more from the show coming soon HERE. Full setlist below.

Earlier in the evening Feist and Ed rode The Cyclone, the famous Coney Island roller coaster (as you can see in the picture above). If you've never been on it, this Saturday during the Siren Festival might be a good time to change that.

For Grizzly Bear and Feist, it was just another example of a growing history of collaborations that includes multiple TV appearances, touring, recorded stuff, and on stage appearances. It's not clear if Ed will be on Letterman tonight too, but we do know that Feist and Wilco will perform the new Wilco song "You and I" on the show. They performed the same song together in Coney Island, and for the first time, in LA on June 25th. Video from that earlier one below.

Two nights before playing in Brooklyn, Feist reunited again with Broken Social Scene on stage at the Harbourfront Centre show in Toronto. For Feist it was at least the second time recently she played with her old band. To make this one even more special though, Emily Haines and Amy Millan were also all up there on stage at the same time - it was a proper BSS reunion. Videos below.

Above mentioned videos, and Wilco's entire Keyspan Park setlist, and video of Ed and Feist singing backup on "You Never Know", below...

Wilco & Feist @ The Wiltern in LA

Wilco-Brooklyn 7/13/09 Keyspan Park -setlist (via)
Wilco (the song)
I Am Trying to Break Your Heart
Shot in the Arm
At Least That's What You Said
Bull Black Nova
You Are My Face
One Wing
Handshake Drugs
Deeper Down
Impossible Germany
Jesus Etc.
Sonny Feeling
I'm Always in Love
Can't Stand It
Hate it Here
Walken
I'm the Man Who Loves You
Hummingbird