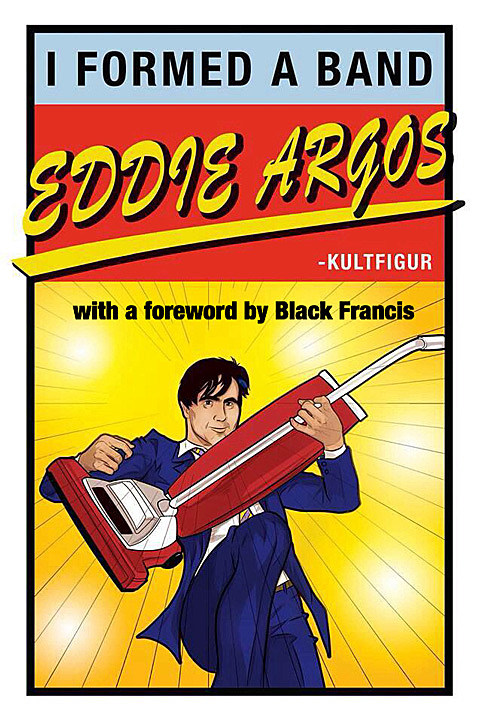 Ten years ago, with my friends, I formed a band called Art Brut. We have a new album out later this year. It has been quite a while since our last record. So, to get yourself reacquainted with us, I suggest you buy this book, my memoir.

I've spent the last three years writing 'I Formed a Band'. The story begins with me playing the vacuum cleaner on stage in Poole, and ends up with Art Brut recording Art Brut VS Satan with Black Francis in Salem, Oregon. - Eddie Argos

Art Brut frontman Eddie Argos' book, I Formed A Band, was funded by an Indiegogo campaign and is out now. That's the cover above as you probably gathered. In it, Eddie promises to answer the following questions:

Just how hard did I kick Paul McCartney when I met him?

What colour did Russell Senior from Pulp try and make me sing in?

Which of Art Brut's songs is Liam Gallagher's favourite, and did Oasis really sing a Half Man Half Biscuit song at me? Or was it a psychotic episode?

What is it like to get into a fight with The Magic Numbers, Kele from Bloc Party and various members of The Bravery? (luckily not all at the same time).

What question did Conan O'Brien ask Jasper Future that he didn't know the answer to?

Why does Al Jourgensen from Ministry think I am a famous singer called Franz Ferdinand with a hit single about my penis?

What valuable lesson did I learn from Anton Newcombe at the Red Rocks Amphitheatre Colorado?

As Eddie mentioned, there's a new Art Brut album due later this year. Stay tuned. Has it really been 10 years since Art Brut's insta-classic debut album, Bang Bang Rock and Roll? If you haven't listened to that in a while (or missed it the first time around), you can stream it via Rdio below...