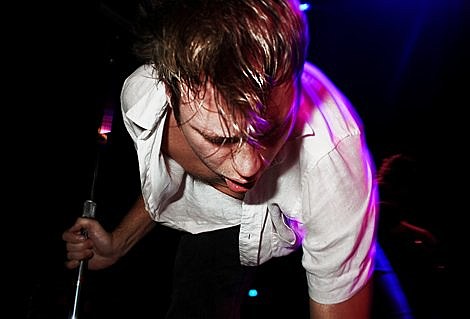 Tickets are still on sale for Pissed Jeans at Knitting Factory in April and now the band have added two more NYC shows in June, both of which are opening slots for Australian punks Eddy Current Suppression Ring:

If you were looking for a day job that would reinforce the credibility of your garage punk band, you could hardly do better than to follow the example of Eddy Current Suppression Ring -- the four members of the group met when they were working at a vinyl pressing plant in Ormond, Victoria, Australia. Inspired by hard-edged, primitive rock in the manner of the Troggs, the Pagans. and X (the Aussie band, not the California punks of the same name), Eddy Current Suppression Ring got its start in late 2003 [and] ...after lots of local gigging and a handful of 7"s and EPs, the band issued their self-titled debut LP on Dropkick Records in 2006. ...The group formed their own label, Aarght Records, to release their second full-length album, 2008's Primary Colours. The album became an unexpected crossover success, rising to number six on the Australian charts and earning ECSR a nomination for Best Rock Album of 2008 at the Australian Music Industry Awards.

ECSR and PJ will play Cake Shop (!) on 6/18 with Home Blitz and Bloody Gears (advance ticket sale info is on the way) and then do it again the next night (6/19) at Market Hotel with Population 1280. Both shows are part of the ongoing Hardcore Gig Volume series.

ECSR is readying a new 7" for Mexican Summer, "Wet Cement" b/w "Hey Mum" + "Through The Trees", due this week. In addition, the band rill release Rush To Relax on Goner in March, dig on one of those tracks, "anxiety", above.

Dig on full ECSR and Pissed Jeans dates, as well as a few videos, below.